Kickstart was seen in energetic form in their second round of BDFA Super Division League drubbing BUFC 6-0 at the Bangalore Football Stadium today. In the second match of the day, FC Deccan rally back to hold Roots FC 1-1 in a thriller.

It was Princewill Emeka again who scored the bulk of goals for Kickstart today but not before Prashanth Kalinga opening the account in the 18th minute. The score was 2-0 in the first half.

Abhishek Powar-56' made 3-0 after changing ends followed by two from Emeka thus completing his hattrick.

Promising Nikhil Raj, who was loaned out to Indian Arrows and Odisha in previous two seasons respectively completed the sixth goal in the added time.

The Roots FC versus FC Deccan game saw the latter pressing early in the game. Roots boys took time to settle down, they had to replace defender Afsal early in the game owing to an ankle injury, but defence held tight not allowing shots from the vicinity.

Roots did manage to take control of the mid-field later in first half, they had couple of goal scoring opportunity one from a howler from opponent keeper.

Post lemon break saw, Roots taking charge having an urgency to score. They took lead in the 59th minute from a move that was orchestrated from defence. Nikhil controlling the ball from back gave to Amogh on the right flank, who in turn passed to Anirudh, the later played to Amogh. Anirudh again got the ball back and put on the back of the net.

Roots joy did not long last. An inch perfect cross from Shelton reached Kaviarasan, whose free header was out of keeper Mani’s reach. There was no one from Roots defence seen following Kaviarasan’s jump.

Roots injected three fresh players that resulted more attack from their end but could not convert to a goal. 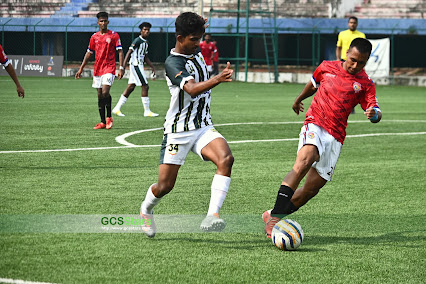 Posted by diegostrikes at 10:52 PM