Bengaluru colts went down 2-1 to Rebels FC in the BDFA Super Division League in a tightly contested encounter at the Bangalore Football Stadium, on Wednesday. Amay Morajkar (19’) was on target for BFC, while goals from Carlos Challam (34’) and Muheeb (84’) secured the points for Rebels.

In the other two games played later at the same venue, Young Challengers drew with Bangalore Eagles and Students Union won their second game in a row defeating Bangalore Independents 2-1.

Bengaluru started the game brightly and pushed the Rebels FC backline deep into their own half in the opening stages. Thoi Singh made all the right noise on the wings and led the attack along with Akashdeep Singh and Kamalesh Palanisamy.

Twenty minutes into the game, Thoi was brought down just outside the 18-yard-box, handing the Blue Colts a free-kick in a dangerous area. Amay stepped up and curled the ball into the far corner beyond the reach of Sanfeer K in goal to give Bengaluru the lead.

Rebels FC clawed their way back into the game against the run of play and scored the equaliser just past the half hour mark when Challam picked up a stray pass and smashed a half volley beyond Sharon from distance.

Into the second half, Bengaluru took the lead back through Kamalesh, but his shot from close range went just wide of the post.

Van Loon brought on Lalpekhlua, Sudheer Kotikala, Damaitphang Lyngdoh and Monirul Molla to boost the Blue Colts’ attack but against the run of play, it was the hosts that found the net. Having won a free-kick close to the corner flag, Sanjib Singh put in a cross for Muheeb, who nodded it beyond Sharon to give Rebels a lead they would protect until the final whistle.

The Blue Colts next face FC Agniputhra, on 12th September, at the same venue. 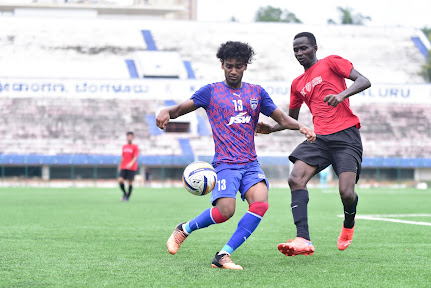 Posted by diegostrikes at 9:14 PM