BFC Media
Bengaluru FC played out a 0-0 draw against Roots FC, in a BDFA Super Division League encounter, at the Bangalore Football Stadium, on Tuesday. Roots FC’s resolute backline marshaled by goalkeeper Arun H, kept the Blue Colts at bay, and saved a point for the hosts.
The first half saw both sides battle for possession early on with the Blue Colts eventually finding the right rhythm. The first chance of the game fell to BFC midfielder Kamalesh P in the 28th minute, who rounded the ’keeper and slotted the ball into an empty goal, but referee Suresh Devraj, upon consultation with his assistant, ruled the goal out for a foul in the build-up.
Close to the end of the first half, Bekey Oram put in a low cross into the 18-yard-box, but Monirul Molla and Ankith Padmanabhan failed to capitalise as the ball deflected off Roots midfielder Gautam Rajesh, before being cleared away.
Into the second period, the Blue Colts put the pressure on the RFC backline and kept the ball in the opposition's half. The biggest chance of the game came in the 68th minute when Ankith found Molla unmarked in the box, but the striker’s effort from distance went wide of the frame.
The rub of the green failed to favour Bengaluru when another chance went begging in the closing stages. Felixson’s cross into a crowded penalty area found substitute Vinith Venkatesh unmarked. But Venkatesh, having struck the ball with his first touch, saw his effort come crashing back into play off the crossbar. Ankith managed to get another shot away on the rebound, but it was easy pickings for Arun.
The Blue Colts kept pushing for the opener, but the Roots backline remained stubborn and saw the game out. BFC now sit in 4th place with 16 points on the board. Bengaluru next face ADE FC on October 14th, at the same venue. 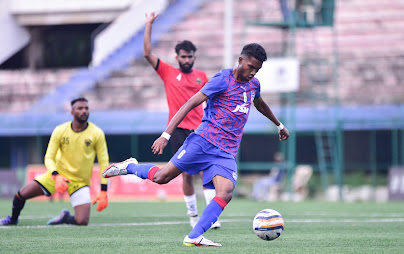 Posted by diegostrikes at 10:58 PM