FC Bengaluru United beat Friends United FC 5-0 in the ongoing BDFA Super Division tournament at the Bangalore Football Stadium. After a goalless first half which saw the two-time defending champions squander several easy chances, FC Bengaluru United came into their own in the second half to notch up five goals through Lalramzauva Khiangte (63), Bedashwor Singh (75, 89), Shibil Muhamed (84), Mohmed Kdouh (86).

As has been the trend in several of their games, FCBU started strongly, looking to create chances early on and control the game. They soon dominated possession and looked to create several chances through clever passes, corners and free kicks but were unable to nail the finish and find the back of the net. Chesterpaul Lyngdoh, Praful Kumar, Aenam Jyrwa, Lalramzauva Khiangte and Irfan Yarwad were all in the thick of the action but were unable to get their team on the scoreboard.

FC Bengaluru United started the second half in a similar fashion, controlling possession, and creating chances but were unable to convert any of them. The deadlock was finally broken in the 63rd minute, a brilliant freekick from Mohamed Kdouh was neatly finished by Lalramzauva Khiangte in the top left corner of the box to get the defending champions on the scoreboard. FCBU continued to keep up the pressure and soon after their second goal followed. Selwyn Miranda ran in from the left and his pass was neatly finished by Bedashwor in the bottom right corner of the goal.

In the 84th minute, a piece of individual brilliance from Shibil Muhamed drew the Friends United keeper out, only to see the ball dribbled past him to get FCBU up 3-0. Two minutes later the fourth goal came when Kdouh smartly scored off a volley from a well-constructed corner from Selwyn Miranda.  In the closing minutes of the game, a defensive error from Friends United saw FC Bengaluru United get the fifth goal of the game through Bedashwor to seal a comfortable win. 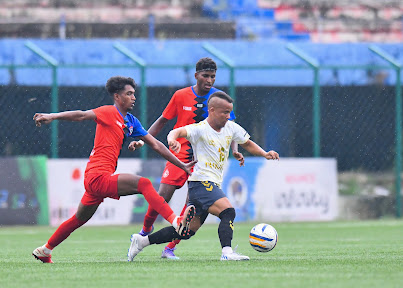 Posted by diegostrikes at 10:39 PM