A ten-man Bengaluru FC played out a 1-1 draw against ASC & Centre FC, in the BDFA Super Division League, at the Bangalore Football Stadium. Monirul Molla’s (24’) strike was canceled out by Elangbam Meitei (45’) as the points were shared on Friday.

Bengaluru started well and kept the ball in the opposition's box. The first chance came to Kamalesh P in the 17th minute when the ball ricocheted in the box before landing at the midfielder's feet. Kamalesh took a touch before firing a shot that Mutum Singh, in goal, saved.

The Blue Colts capitalised on a loose pass from ASC & Centre FC less than ten minutes later. Molla’s constant press paid off as he took advantage of the situation before slotting it past the ’keeper from close range to make 1-0.

Bengaluru looked in control of the game, but a moment of madness cost the Blues the lead. Rajanbir Singh was sent off for sabotaging a goal-scoring opportunity with what seemed to be a reckless tackle. Meitei stepped up for the freekick and placed it in the bottom corner, beyond the reach of Sharon Padattil, to level the score at half time.

Into the second period of action, Jan van Loon made some attacking changes to his squad, bringing on Shighil and Thoi Singh. The winger ran straight into the thick of things and was a menace down the left wing.

The chances kept coming, but the Blue Colts couldn’t find the back of the net. With ten minutes left on the clock, Lalpekhlua was brought on as Bengaluru threw everything at ASC in a bit to score a late winner.

Bengaluru FC next face Bangalore Independents at the same venue, on 31st October. 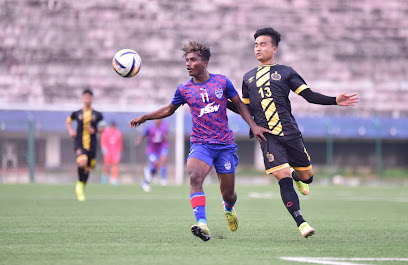