FC Bengaluru United started off trying to control possession and creating chances - in the fifth minute, an overlapping run from Ashok Singh set up a decent chance for Mohmed Kdouh to head the ball into the goal, only to see it miss the left post by inches. FC Bengaluru United continued to create chances but were unable to see them through. Finally, in the 14th minute, smart interplay in the midfield led to the wing where Ashok, courtesy a deft left foot, set up another header chance for Kdouh, who this time did not disappoint. Twenty one minutes later, after a series of missed chances, FCBU went up 2-0 - Lalramzhua Khiangte and and Ashok combined to send the ball into the heart of the opposition’s defence; Irfan got a touch on the ball to sneak in and score.

FCBU suffered an early set back in the second half - 53 minutes in, Jairo Rodrigues was shown the red card to leave FCBU one man down and their defence under pressure. The defending champions scrapped hard to shore up their defence but finally succumbed in the 78th minute as FC Agniputhra converted the penalty opportunity. Three minutes into extra time, FC Agniputhra sneaked in the equaliser; the final score line 2-2. 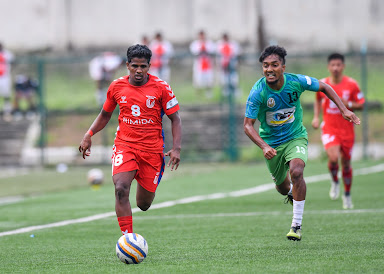 Posted by diegostrikes at 8:45 PM