Jan van Loon’s Bengaluru FC B side played out a thrilling 3-3 draw against Friends United FC at the Bangalore Football Stadium, in Bengaluru, on Friday. The result took the Blue Colts to 24 points from 11 games on the BDFA Super Division League standings.

Jan van Loon’s side kept possession in the opening stages and found the breakthrough past the half hour mark when combination play between Damaitphang Lyngdoh and Edwin Rossario allowed Amay Morajkar time and space to find the finish in the box. Moments later, the Blue Colts attacked on the counter, with Monirul Molla breaking free. Driving his way into the box, the striker made no mistake to slot past the United ’keeper.

Friends United pulled one back at the stroke of half-time when Dipesh Chauhan came off his line to bring Vijay Thangavel down, prompting the referee to point to the spot. Thangavel made no mistake from 12 yards, putting his penalty past Chauhan to reduce the deficit.

Into the second period, Bengaluru restored their two goal cushion through midfielder Lyngdoh. Having done well down the flank to beat his marker, Thoi Singh’s pass into the box fell to the diminutive midfielder, who finished with ease. Friends United would reduce the deficit through Thangavel yet again, who rose highest in the box to nod home from a corner to make it 3-2 with less than ten minutes to play.

Against the run of play, Friends United restored parity under fortuitous circumstances when Vinith Venkatesh, in his attempt to intercept a long ball forward, took a heavy touch that deceived Chauhan and rolled into the back of the Blue Colts’ net to make it 3-3 in the 87th minute.

Bengaluru FC B next face Sporting Club Bengaluru at the same venue, on November 8th. 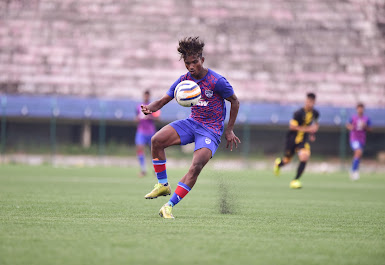 Posted by diegostrikes at 7:40 PM