FC Bengaluru United put on a commanding performances to beat Rebels FC 3-1, the goalscorers for FCBU were Mohamed Kdouh (14, 30) and Shibil Muhammed (56).

FC Bengaluru United started off strongly, creating chances from the very first minute. The trend continued; in the 8th minute a smart free-kick from Lalramzua Khiangte was headed towards the goal by Mohamed Kdouh, only to see it miss the bar by inches. FCBU continued to create chances and the deadlock was finally broken in the 14th minute. Ashok drove the ball into the box where Kdouh was waiting to smartly tap it into the goal.

FCBU continued to press on and soon enough a defensive lapse from Rebel FC saw the ball land at Shajan Franklin’s feet. He passed it on to Kdouh who made no mistake, netting the ball into the net. Against the run of play, Rebels FC scored on the brink of halftime.

FCBU continued to dominate the second half – after a series of great chances, FCBU got their third goal on the scoreboard courtesy Shibil Muhammed, to seal an emphatic 3-1 victory. 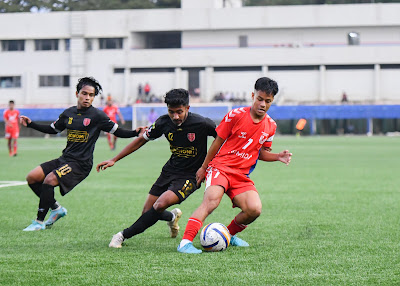