Bengaluru FC Media
Monirul Molla found himself in the thick of things again as Bengaluru FC hit five past Bangalore Dream United FC in their penultimate encounter of the BDFA Super Division League, in Bengaluru, on Thursday. Molla’s strikes, one in each half, were added to by goals from Ankith Padmanabhan (40’), Rajanbir Singh (64’) and Satish Singh (57’ OG).
Bengaluru began the stronger of the two sides and took the lead just eight minutes in when Molla slipped through the BDU backline to be found by an inch-perfect Shighil NS pass. Molla made no mistake, pushing the ball past the ’keeper and slotting home. Bengaluru’s second goal came in the aftermath of a set-piece when Ankith found himself in space to find the net from close range.
Into the second period, Bengaluru continued to push the needle, scoring just 12 minutes in. A cross into a dangerous area was turned into his own net by Satish, whose attempted clearance was bundled over to give Bengaluru a 3-0 lead.
Bengaluru’s fourth came from a well-worked routine that saw Edwin Rossario clip a cross into the box from the left wing, allowing Moni to flick it on and for Rajanbir to tap home from close range. Into the final ten minutes, Molla would grab another, combining with Akashdeep Singh in the final third, before placing his shot past the United ’keeper.
The Blue Colts next face Kickstart FC in their final encounter of the 2022-23 BDFA Super Division League. 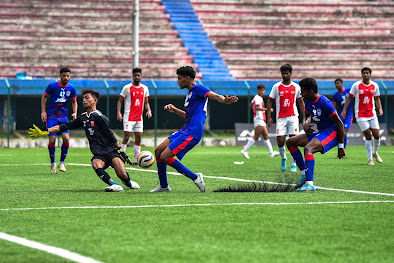 Posted by diegostrikes at 6:16 PM