FCBU Media
In an action-packed game at the Bangalore Football Stadium, defending champions FC Bengaluru United were held to a 1-1 draw in the ongoing BDFA Super Division Championship against Sporting Club Bengaluru.
Both teams started on a positive note, trying to create chances, but it was Sporting who seemed to wrest the early advantage. The FC Bengaluru United defense was put under pressure for the first time; the early momentum that FCBU enjoyed in their previous games was missing as Sporting looked to create strong chances. As they pressed on, it was Manoj Kannan who was the star for the FCBU in the defense, holding fort like a rock. However, despite FCBU’s best attempts, it was Sporting who got on the scoreboard in the 41st minute. A strong drive from the right wing caught two FCBU defenders on the wrong foot, and an awkward bounce for FCBU goalkeeper Srijith set up an easy chance for Sporting to convert.
Determined to keep their unbeaten record intact, FCBU came out much stronger in the second half, looking to counterattack and create chances. A cross from Aenam in the 51st minute was headed in just wide from Mohamad Kdouh.  The very next minute, Chesterpaul’s cross was headed just above the goal post by Jairo. FCBU continued to press on strongly and it was in the 71st minute that they got on the scoreboard, courtesy of a penalty taken by Irfan Yarwad. Both teams continued to press hard in the final 20 minutes but were unable to convert any further chances as the score line ended in a hard-fought 1-1. 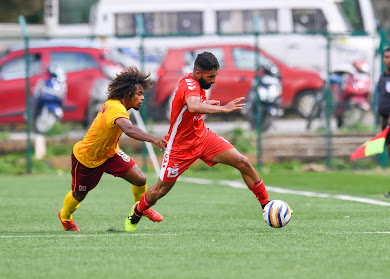 Posted by diegostrikes at 10:38 PM