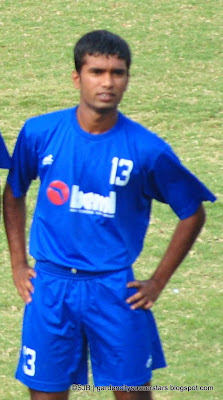 The state seniors survived scare from the minnows Meghalaya, but finally pulled up a goal in the dying moments of the match. The match was played in the Municipal Stadium, Khardaha, a suburb of Kolkata. BEML medio Don Bosco scored most-important goal in the 89th minute.

What seemed like an easy match for Karnataka, however, Meghalaya, bolstered with some nifty players from Shillong Lajong FC, put up a stiff challenge to the Karnataka lads.

It was a sort of mini reunion, veteran Gumpe Rime, who kept goal for HAL for many seasons, turned against his former state as he kept Meghalaya’s goal today. Not to forget striker R C Prakash, who starred in many great wins for his former club Mohun Bagan in Kolkata.

Talking to Garden City Soccer Stars from Kolkata, senior player Xavier reckoned that the team played well and made several good moves, however, rued about converting those chances to goal.

“RC, Rajendra Prasad, including myself missed scoring chances. My shot was superbly saved by Gumpe”, said the captain for the last 3 Santosh Trophy editions. “It was even stevens in the first-half. However, we dominated the proceedings in the second-half. Also, Satish jr., who was replaced for RC Prakash played a nice cameo”.

Karnataka will play their last group match against Jharkhand on Monday, July 19. The winner from this cluster will move to the quarter-fi
Posted by diegostrikes at 8:47 PM