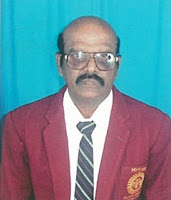 Renowned footballer from Bangalore, I Arokiadass, passed away at his residence on last Thursday, November 4, 2010. Arokiadass was 74 years of age, he was suffering from kidney-related problem, and left his wife and 5 children.
Playing in the midfield position, Arokiadass represented Mysore for several seasons. An employee of HAL, Arokiadass played for his employer for 17 seasons. After hanging boots, he was associated with the in several capacities – coach, selector, management.
Arokiadass came from the small locality of Gauthampuram, which is considered to be the supply line of Bangalore football.
Several fans, friends, and well wishers paid homage by visiting the home where he breathed his last. The state and district football officials condoled the sad demise of the former player.

Posted by diegostrikes at 10:24 AM