HAL started their home campaign in a dull note as Karim Bencherifa-coached Salgaonkar convincingly beat them 1-0. Ghanaian striker Yusif Yakubu’s shot hit the post several times and the scoreline might not depict the true essence of the game. This was the third consecutive defeat for the aircraftsmen. 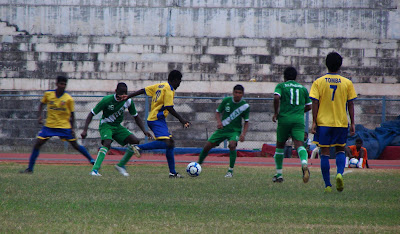 Yakubu trying to squeeze past HAL defense
Decent crowd came out on a busy weekday at the Kanteerava Stadium to cheer their team. This stadium was hosting a top-level football match after several seasons. However, much to crowds disappointment, Salgaonkar took the lead in the 11 minute of the game from Brazilian stopper back Luciano Sabrosa header from a Ryuji Sueoka corner.

Salgaonkar dominated the rest of the first half by displaying total control on the midfield and some tight defending.

HAL’s striking ability was marred by the absence of Xavier VijayKumar, who is virtually out for the next three weeks. The striking partnership of Hamza and Meikinlung didn’t pose any real threat to the Salgaonkar defense.

Second-half saw a better HAL, with the midfielders trying to play possession game. They provided aerial ball to the strikers, however, the later failed the crack opponent’s defense. 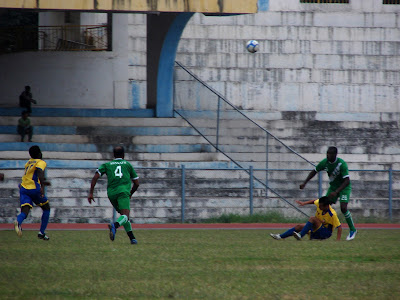 Femi challenges Sueka, Yakubu looks to collect the ball
Salgaonkar missed a penalty in the 70th minute of the match and failed to score their second goal. Sueka was brought down by the keeper inside the penalty box. Yakubu’s penalty kick was saved by the keeper. 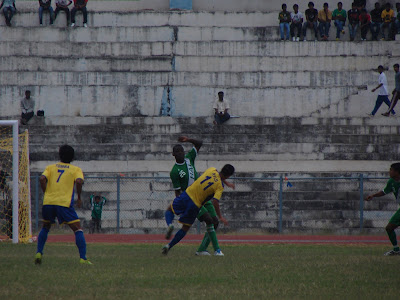 Sueka takes a powerful shot
HAL kept pressurizing Salgaonkar in the last few minutes of the match, however, some wayward dead ball shots didn’t help them to get back in the game.

In the post-match press conference, Salgaonkar coach Karim Bencherifa highlighted the importance of getting full-points from an away game. Also, praised his players for pulling out this match on a difficult ground which was full of uneven bounce.

Muralidharan, HAL manager expressed his distress with the unavailability of top players. Team will play 19 more matches, he is confident of HAL coming back from behind.

Posted by diegostrikes at 12:31 AM