Bengaluru FC showed absolutely no signs of rust or lack of time to prepare as Albert Roca’s side turned on the style to beat North Korean side 4.25 SC 3-0 and take a big step towards the Inter-zone final on a rain-soaked night at the Kanteerava Stadium, in Bengaluru, on Wednesday.

Goals on either side of the break by skipper Sunil Chhetri (32nd minute, Penalty) and Udanta Singh (51st) put the Blues 2-0 up before Lenny Rodrigues joined the party with a goal in the 77th minute to give the Blues a massive advantage ahead of the away leg on September 13 in Pyongyang.

The Blues went on attack mode right from the word go as Udanta Singh intercepted a pass in the rival half and attempted a shot in the first minute itself which was saved by the 4.25 SC custodian. Thereafter, visitors 4.25 SC had a spell of possession where they tried to make inroads into the Blues’ box, only to be thwarted by Roca’s boys.

Having had half-chances for most part of the first half, an intelligent move around the half-hour mark opened up the rival defence and handed Bengaluru their first goal. Juanan with a long diagonal ball found Harmanjot Khabra on the flank who headed it into box for Udanta whose pace was too much for the rival keeper to handle as he brought the youngster down. Chhetri then coolly chipped in the resultant penalty kick for his third goal of the competition to hand the Blues a 1-0 lead.

Bengaluru continued to push up and almost doubled their lead three minutes from the break. Chhetri timed his run to perfection to beat the offside trap on a lobbed pass inside the box. The skipper controlled the ball and tried to chip an onrushing keeper who got a deft touch to divert it for a corner. The half ended with Bengaluru firmly in charge and a goal up.

The Blues got off to the perfect start in the second half doubling their lead six minutes in. Udanta, once again, intelligently intercepted a pass on the right before running solo and making no mistake to slot home past Ri Kang in the rival goal.

The visitors created a few chances of their own, but the Blues’ backline led by ’keeper Gurpreet held firm under the torrential downpour. Midway through the half, Lenny Rodrigues almost pulled off a blinder. His pile driver from 30-yards out was headed for the roof of the goal, only for the keeper to palm it over.

With incessant rain pouring down, both sides were finding it difficult to control the game; however, the Blues adjusted to the water-logged pitch much better which translated into another goal. A quick release by Dovale down the left saw Chhetri run clear and float in a delightful cross to Lenny, who timed his run well at the far post to slide the ball home and seal the game.

Substitute Daniel Lalhlimpuia had a chance late on to get his name on the scoresheet, but he somehow scuffed his shot wide from inside the box as the game ended 3-0. 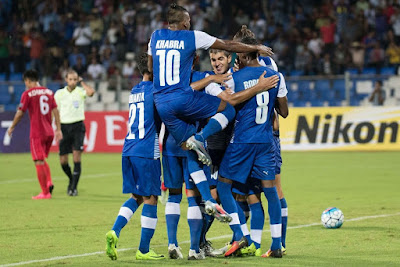 Posted by diegostrikes at 12:17 AM