Bengaluru FC will look to get the job done when they face Bhutan National League champions Transport United in the second leg of the 2018 AFC Cup Preliminary Round One at the Sree Kanteerava Stadium, on Tuesday. Coming back from a goalless draw in Thimphu, the tie hangs in the balance as the winner takes all from the second leg.

Having rolled out a heavily rested side in the reverse fixture, it will be intriguing to see the side that Albert Roca rolls out as he banks on home advantage to progress.

“Transport United are a side that can be dangerous on their day and we can’t take this game lightly. Our fans and the Fortress will provide us that extra bit of push. We know that a win can take us through but we know that the equation is the same for them and that they will put on a strong show,” said Roca on the eve of the clash.

It was the Blues who dominated the game in Bhutan, creating numerous chances throughout the two halves. However, the boss rued the lack of a finishing tough in the attacking third. “We fell short in terms of finishing last week and that is an area we have been working hard on in our training sessions and I think that will be key to the result.”

The game will the Blues’ third in eight days, and the Boss has hinted that the second leg of the tie might once again see some changes. “We’re playing a game almost every three days and it’s important to make use of the entire squad to keep them in the best shape possible. We must win, but at the same time the focus is on the larger picture. The depth in our squad is big and I know that whoever is given a chance will go out there and do their best.”

The game kicks off at 8 pm. 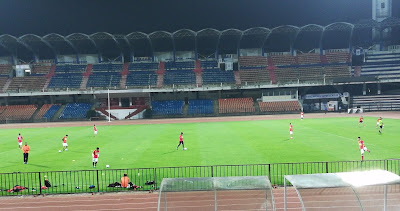