Bengaluru FC have named a 30-man squad for the upcoming Preliminary and Play-Off Stages of the 2018 edition of the AFC Cup, the club announced on Saturday. The squad which departed for Delhi earlier in the day, will travel to Thimphu in Bhutan on Sunday where they face Transport United on January 23rd.

The qualifying stage squad consists of as many as seven young players from the BFC ‘B’ setup and making the cut are Asheer Akhtar, Myron Mendes, Cletus Paul, Robinson Singh Khumukcham and Bidyananda Singh. Joining them are BFC Academy Graduates Leon Augustine and Prashanth Kalinga, who were also part of the 2017 AFC Cup squad and along with Robinson, travelled with the first team to Spain for the preseason.

The Blues who fell short of making it to their second successive final in one of the biggest competitions in Asian football, are eager of improving on their performance this season after booking their place in the competition courtesy of the Federation Cup win in May 2017. However, Bengaluru who finished as the South Zone toppers in 2017, will have to go through the two-stage qualifying phase to make it to the group stage this year.

Up against Bhutan National League 2017 champions in the first leg of the Preliminary Round on Tuesday, 23rd January, the Blues will host the second leg against Transport United at the Fortress a week later, on 30th January. Should they make through to the Play-Off stage, Bengaluru will be up against the winner of the second preliminary round tie in the South zone between Bangladesh’s Saif Sporting Club and TC Sports Club from Maldives. The winner of the two-legged Play-Off scheduled on 13th and 20th February will grab the fourth spot in the South zone of the AFC Cup Group Stages.

Ahead of the team’s departure to Thimphu, Head Coach Albert Roca said, “It’s very important for us to make use of the entire squad. We’re the only ISL team playing Asian competition this season, and our schedule is hectic. But this is what we always wanted, to represent India in Asia, so there’s no complaints. With the competition rules, we can only play four foreigners so that provides a good opportunity for all our Indian boys, especially the youngsters to rise to the occasion. Our ‘B’ team players have been working hard, and that’s why they have been brought into the squad and I hope they will respond to the occasion.” 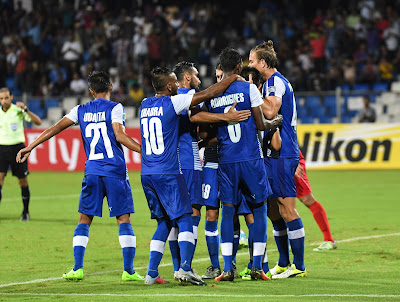 Posted by diegostrikes at 5:03 PM