State boys take on the strong Services team in their final match tomorrow 4 pm Bangalore Football Stadium. Both teams are on same point after two wins. Karnataka is better on goal difference (+7) than their opponent (+4). Services, in their last match against Telengana, were stretched till the last minute.

Only one team from each group will qualify for the Santosh Trophy final round.  Should the match ends in a stalemate, Karnataka would qualify by virtue of better goal difference.

Coach Muralidharan is not ready to bank on the advantage of goal difference. Playing for a draw is always risky, we will go for straight win.

State team created several chances in their last game, however missed scoring opportunities on most of the occasion. Something that will worry coach. 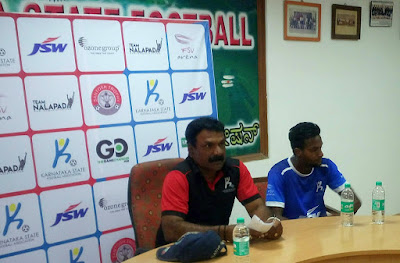 Posted by diegostrikes at 9:52 PM