The glamor and sheen of Santosh Trophy, the Senior State Nationals, is all over but Bengaluru is set to host the Santosh Trophy South Zone qualifiers.

Eight teams are divided in two groups, the winners from both groups will advance to the final stage. Matches will be held at the Bangalore Football Stadium from January 17 to January 22.

Though AIFF have yet come up with the tournament fixture, but looks like the inaugural match will be played between host Karnataka and Telangana.
The zonal pattern was introduced in 2014, last time Santosh Trophy was hosted in 68-69, during the erstwhile Mysore era. Played at Sri Kanteereva Stadium, Mysore beat Bengal in the final.

Final team list, tournament fixture, etc., are not yet out.

Regarding the controversy surrounding a player who attended the training camp without any football experience, KSFA president, NA Haris, quietly understated any kind of partiality in the selection of the team, “I have received several personal recommendations, only the deserving played would make the final cut.”

However, what is suspicious is the manner in which the undeserving player was called in the selection camp, for which the KSFA President had no answer. 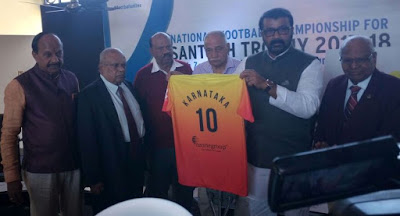 Posted by diegostrikes at 12:23 AM