Attacker Naorem Roshan Singh’s 4th minute goal was enough for Bengaluru FC to seal a fourth successive win in the BDFA Super Division League as they overcame South United FC 1-0 at the Bangalore Football Stadium, in Bengaluru, on Sunday. The win was the Blue Colts’ fifth of the campaign in six games, and took their tally to 15 points, consolidating their top spot in the standings.
The Blue Colts played with a man less for the entire second half after goalkeeper Aditya Patra was sent off for bringing down South United attacker Rizwanali outside the box in the first minute of injury time in the first half.
It was the Blue Colts who began the game aggressively and it took only four minutes for them to break the deadlock. Defender Parag Shrivas sent Roshan through in the box with a quick throw-in from the left flank on a counter attack. Roshan controlled the ball well and held off a couple of challenges before slotting it past the Jayanth Kumar in the rival goal on the bounce.
With a one goal advantage, Moosa’s boys took charge of the proceedings dominating possession in the rival half. With South United forced back, the Blue Colts had attempts on goal through Altamash Sayed and Roshan but the duo couldn’t get the better off the rival custodian.
With the first half coming to an end, Bengaluru suffered a setback when Patra was shown a straight red. The ’keeper was penalized for bringing down Rizwanali couple yards outside the box in a one-on-one situation.
Despite having a man less for the entire second half, the Blue Colts managed to dominate the proceedings and had a couple of close chances through Edmund Lalrindika and Altamash who failed to convert. Nonetheless, Bengaluru managed to defend well and seal a well-deserved win.
The Blue Colts now play Bangalore Eagles on Tuesday, December 11. 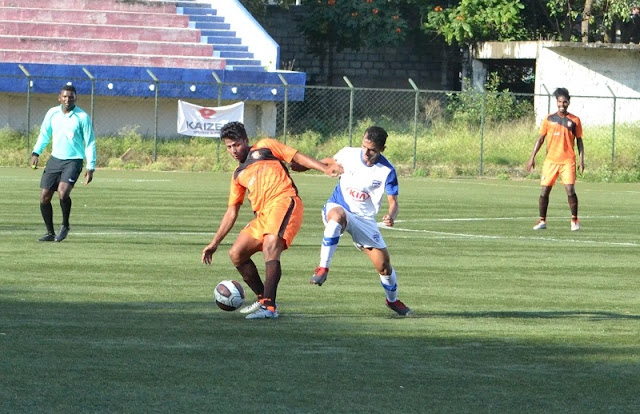 Posted by diegostrikes at 11:33 AM