Bengaluru FC completed the contract extension of influential playmaker Dimas Delgado after the Spaniard signed a new one-year deal on Monday that keeps him with the ISL champions till the end of 2019-20 season.

The Gramanet-born midfielder who turned 36 in February played a crucial part in Bengaluru FC’s Indian Super League triumph last season being the top assist provider for the Blues. In fact, ever since joining the club back in 2017, the Spaniard has been an ever-present figure in the Bengaluru side, first under Albert Roca and then, Carles Cuadrat.

Delighted at extending his stay with the ISL Champions, Dimas said, “I’m so happy and proud to be able to continue for another year at Bengaluru FC - a club which has shown a lot of respect and affection towards me and my whole family.  I felt at home here ever since I arrived in 2017. The two seasons so far have been fantastic and I have enjoyed every bit of them personally and professionally.”

“We have a fantastic technical staff that I respect and admire a lot. It’s easy to work with them and of course, we also have some great players in our team. I want to continue helping the club to win more titles and in becoming better every year. I feel like I'm at the best club in India with the best fans, and I hope to continue enjoying this fantastic experience,” added Dimas, who was also the Blues top passer in each of the last two seasons in the ISL.

While he emphasised the importance of tying down Dimas to the club, Bengaluru FC Coach Carles Cuadrat said, “There’s little need to explain how vital a presence Dimas has been to this club over the last two seasons. He very clearly dictates the way we end up playing and I’m very happy that we will have his experience and leadership for another season. Like I’ve said before, it’s important that we keep as much of the core of this team together and Dimas’ extension is a step in that direction.”

Dimas becomes the third foreigner in the squad for the upcoming season alongside fellow Spaniard Juanan Gonzalez and Australian Erik Paartalu, both of whom already signed extensions last season. 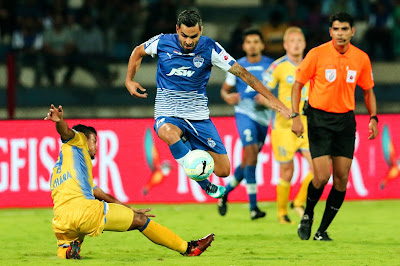 Posted by diegostrikes at 11:22 AM