South United Football Club officially announced the appointment of Alfredo Fernandes as their new Head Coach. The Bengaluru club were able to attract Mr. Fernandes after two seasons in-charge of the Churchill Brothers I-League side and one season spent as Technical Director at the club.

Speaking ahead of the announcement, Alfredo Fernandes said, “I was thrilled to see the long-term vision and passion shown by South United FC. The plans and ideas they have for the club are what drew me to the job and I’m excited to be a part of this endeavour.

“The club has come a long way so far and my goal will be to carry on this incredible journey and build on it as we move forward to try and achieve our long term and short term goals.”

SUFC are soon holding trials for aspirants who want to play for the senior team during the 2019-20 season and are keen to have Mr. Fernandes involved from the very beginning.

The AFC ‘A’ License holder, Alfredo Fernandes, began his coaching career with Young Strikers after spending 18 years as a professional footballer. As a player he represented the likes of Dempo SC and Churchill Brothers among others.

He finished his playing career at Young Strikers and then coached the side for 3 years. Following that, he joined Churchill Brothers to coach their U-20 side and played the role of Assistant Coach for the senior side for 10 years before taking over as Head Coach in 2016. He remained head coach of the side for 2 seasons before taking the post of Technical Director at the club. 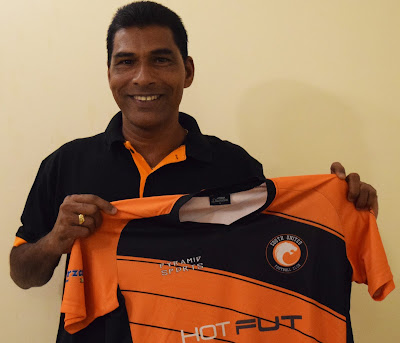 Posted by diegostrikes at 11:13 AM