It was a cagey game that produced few clear-cut chances but South United were able to take a couple of the ones they created to claim all three points. Just when it seemed like the game was going to trickle to a draw, Abhilash came up with the goods to see his side emerge victorious.

The game began with both sides struggling to go past each other’s midfield. Neither side seemed to be willing to let, largely with Bangalore Eagles working to stifle any attacking impetus from South United. The deadlock was, however, broken in the 13th minute when Rungsing put a good move to bed with a placed shot to beat the goalkeeper. That opened up the game a lot more and saw the Eagles push forward to try and break down South United.

It would only be in the 30th minute, though, that former South United forward Cletus Dominic would bring Bangalore Eagles level in the game from a close-range header worked from a long throw. SUFC ended the first half level despite having most of the early impetus.

The second half saw both sides struggling to create and working more to stifle each other. South United FC, in particular, couldn’t get their interplay in the final third right. It would take a piece of individual skill to give South United the lead once again. Sudipta Malakar strolled down the left flank to beat his marker and spot Abhilash in the middle with a cross. The substitute made no mistake from close range as South United put themselves closer to victory.

They defended well in the dying minutes to keep Eagles at bay and ensure that they ended the game with three points. 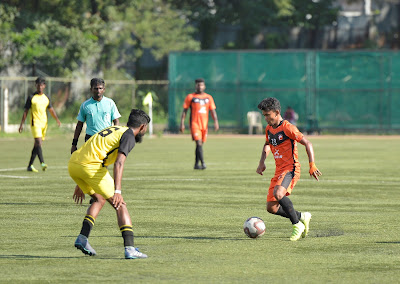 Posted by diegostrikes at 12:58 PM