Fourth Hero Indian Women’s League to get underway from tomorrow

The fourth edition of the Hero Indian Women’s league gets underway at the Bangalore Football Stadium from tomorrow. The 21-day long tournament will culminate with the Finals being played on the 14th February. The first-ever rolling trophy for the Hero Indian Women’s league was unveiled in a glittering ceremony in the city today. Captains of the team representing all the 12 teams from 10 states were present along with Mr. Sunando Dhar, CEO, League, AIFF, Mr. Satya Narayan, Hony. General Secretary, KSFA and Ms. Maymol Rocky, Head Coach, Indian Women’s National Team.

Each team would play a total of 5 matches in the round-robin league and the top two teams from each group will make their way to the semi-finals. The Semi-final winners thereafter would play the finals on the 14th February 2020, which shall kick-off from 2 PM onwards.

Over INR 20 Lakhs of the cash prize is due to be won in the 4th Hero Indian Women’s League. The Champions shall walk away with the rolling trophy and medals along with a cash prize of INR 10 Lakhs, while the Runner’s UP will get richer by INR 5 Lakhs. The tournament MVP ( Most Valuable Player) would earn a total of INR 1.25 Lakhs, the best goalkeeper would get richer by INR 1 Lakh and the emerging player winner would earn INR 75000 from the tournament. The hero of the Match for each game would earn an additional INR 5000.

This will also be the first time when a rolling trophy would be instituted for the Hero Indian Women’s League. Elaborating further on this Mr. Sunando Dhar, CEO, Leagues from AIFF said, "A rolling trophy is something which always augurs well with players and the contest gets intense amongst them. To align the premier women's league competition in India with other leagues, we have decided to shift to a running trophy this season and it'll surely push the girls further to give an extra bit on the field to lift it on 14th February."

Mr. N A Harris, President, KSFA lauded AIFF's decision to organise the final round of the tournament in Bengaluru. "On behalf of the KSFA (Karnataka State Football Association), I would like to thank AIFF for choosing Bengaluru as the host for the final round of Hero IWL 2019-20. It'll surely give a chance of the football-loving crowd of Bengaluru witness the best women football players in action over the next few days," said Mr. N A Harris, President KSFA.

He further added, "Two teams representing Bengaluru in Hero IWL isn't only going to help women's football in Karnataka but also will add a bounty point for the entire tournament. It'll surely inspire more girls from the state of Karnataka to play the beautiful game with more urge and seriousness."

The garden city of Bengaluru becomes the fourth city to host the Hero Indian Women’s League after the previous three editions were held at New Delhi (2016-17), Shillong (2017-18) and Ludhiana (2018-19). Eastern Sporting Union from Manipur emerged as the champions of inaugural edition before Rising Student’s Club from Odisha beat them in the final the following season (2017-18). In 2018-19, Sethu FC, the Tamil Nadu outfit, outplayed Manipur Police in the final to win their maiden Hero IWL crown.

Speaking about the growth of Indian Women’s Football and how the Hero Indian Women’s League has grown year after year, Ms. Maymol Rocky, Head Coach, Indian Women’s National Team, said, "Indian women’s football is on an upward swing and I would like to thank the AIFF for all its efforts in helping the growth of Women’s football in India. With global tournaments like the U17 FIFA Women’s World Cup scheduled to be played later this year in India, I am sure that we will get to see many more youngsters trying to make a career in football. The Hero IWL will be one of the key places for all of us to analyse talent and consider them for future roles with the national teams. The competition level in Hero IWL has risen by leaps and bounds over the last three years and we hope to see another intriguing season of Hero IWL here in Bengaluru. I wish all the teams best of luck for the upcoming tournament." 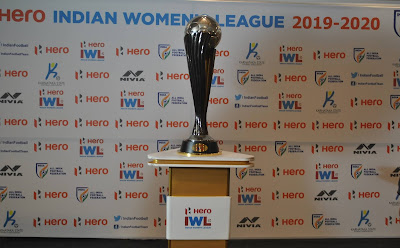