Akbar Sidhique struck twice in each half and sealed the victory for MEG against Dream United in the Citrus Ventures BDFA Super Division league played at the Bangalore Football Stadium this evening.
Dream United, relatively an inexperienced side comprising players from their academy setup with an average age of 19, tried hard in the second half reduced margin after forcing a penalty before MEG scored their third and bottling the game up.
After coaching MEG for 8 seasons and helping the team to reach great heights, which included couple of BDFA Super Division title, Puttiah Memorial Cup, and several national level tournaments, head coach Shaji SP was seen in the opponent bench. Shaji has been associated with Dream United for past few years.
In the first match of the day, FC Bengaluru United defeated ADE 4-2. 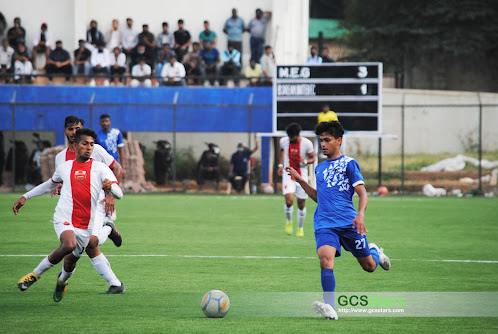 Posted by diegostrikes at 9:40 PM