FC Bengaluru United turned in an emphatic performance yet again to beat ADE FC 4-0 in their third game of the BDFA Super Division Campaign. Dominant from the word go, FC Bengaluru United kept their foot on the pedal throughout to secure a hat trick of wins in the tournament.

FC Bengaluru United started off playing aggressively, a move that soon yielded rich dividends. Jaison got them on the scoreboard with a beautiful goal curled in from just inside the top box. A smart assist from Kiran to Chetan saw him dribble adroitly past two defenders and FC Bengaluru United were up 2-0 in 35 minutes. And their defense game was on point as well – with ADE FC barely getting any chances on the goal.

FC Bengaluru United didn’t let the momentum slip in the second half – and much like their first game against Income Tax, their substitutes too had a say! Malem, who came on around the 50th minute, took charge of a cross from Ronald and netted it safely into the goal. And in the 72nd minute, Ronaldo scored off a free kick to top off what has been a commanding performance from FC Bengaluru United thus far- strong in attack and sturdy in defense! 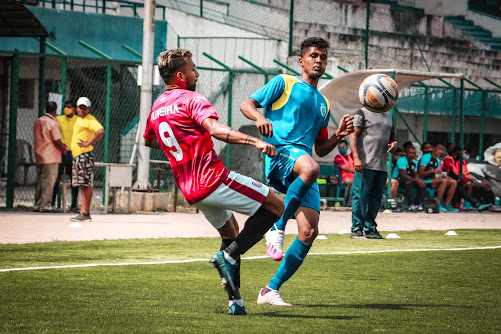 Posted by diegostrikes at 10:09 PM