Bengaluru FC came from a goal down to beat FC Deccan 4-2 at the Bengaluru Football Stadium on Wednesday. Coach Sandesh Bhoite made one change from the opening game of the BDFA Super Division season as Bekey Oram moved to the bench and Kamalesh replaced him for the Blue Colts.

Despite having the majority of possession and dominating the game, Bengaluru fell behind to a well-worked goal as Deccan moved the ball to the left flank and Kaviarasan’s first time finish from the cross beat Dipesh Chauhan in goal.

However, the Blue Colts took less than five minutes to equalise when Shivasakthi dropped back to pick up possession, turned his marker and thread in a through pass to Kamalesh. The midfielder took a touch before composing a firm, low finish past Dilip.

Early in the second half, Deccan had a chance to retake the lead when the referee pointed to the spot following a foul by Jagdeep Singh, despite the linesman deeming the contact to have happened outside the area. Dipesh did well to dive right and save Sajeesh’s effort to keep the scores level.

Sajeesh then atoned for his penalty miss nine minutes from time when he rose high to head home from a corner, but all hopes of an FC Deccan revival were thwarted when the Blue Colts added one more to the board on the 90th minute mark. Lastborn Mawphiang carried the ball forward on a counter and picked out Omega Vanlalruaituanga, who finished from the edge of the box to make it 4-2 and seal the points.

The Blues are back in action at the same venue on January 27 when they take on Income Tax FC. 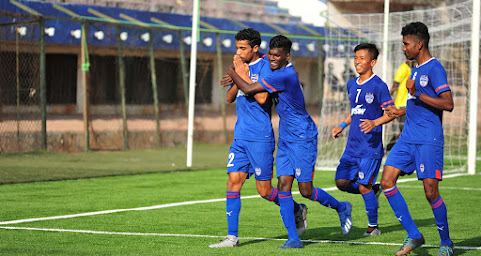 Posted by diegostrikes at 10:27 PM