Bengaluru FC made it four wins in four in the BDFA Super Division League with a 5-2 defeat of Students Union FC, at the Bengaluru Football Stadium, on Tuesday. Akashdeep Singh was the star of the day for Sandesh Bhoite’s side, with his four goals helping Bengaluru come from behind to take all three points and retain their place atop the League standings.

The game was off to a frantic start with both teams eager to impose themselves from the go. With just six minutes on the clock, it was Students Union who took the lead through Japanese striker Tazki Yoshida. Murli Srinivas won a duel with Harmanpreet Singh in the box and squared the ball to Yoshida, whose shot had enough power to sneak into the goal despite Dipesh Chauhan getting his gloves to it.

The Blue Colts responded less than four minutes later, when Akashdeep was brought down by a clumsy tackle in the area, prompting the referee to point to the spot. The winger then made no mistake, converting his penalty to bring the Colts back on level terms.

The turnaround was complete one minute before the break when Shivasakthi, who spent most of the half playing on the SUFC defenders’ shoulders, finally broke the offside trap to get to Thoi Singh’s ball. Seeing Abhishek Ramesh come off his line, the striker opened his body and put the ball into the far corner, giving his side the lead.

Bengaluru needed little time to find their rhythm in the second period and only four minutes after the restart, Shivasakthi turned provider. Receiving the ball at the edge of the box, the striker twisted and turned his markers before finding Akashdeep free, whose shot hit the back of the net before Abhishek could react. Akashdeep then completed his hat-trick only moments later when he got to the end of Shivasakthi’s cross and cushioned the ball past the Students Union custodian to make it 4-1.

Akashdeep then got his fourth of the afternoon with a similar finish from inside the box, after Thoi Singh got into the area and found him with a low pass. Into the closing stages, Sanjay S. pulled one back for Students Union but it was too little too late. Union were then reduced to ten men heading into injury time when substitute ‘keeper Jeevan Kumar was given his marching orders for a rash challenge on Shivasakthi outside the box.

The Blue Colts are back in action on February 4 when they take on ADE FC. 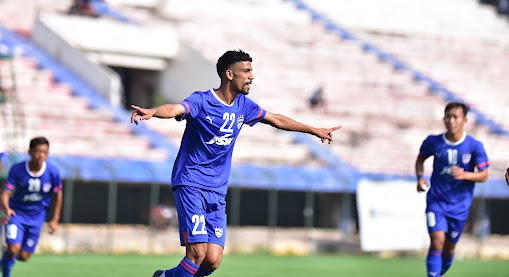 Posted by diegostrikes at 8:29 PM