Bengaluru FC’s perfect start to their BDFA Super Division League continued with a 4-0 defeat of Bangalore Dream United FC at the Bengaluru Football Stadium, on Tuesday. The win, their sixth in six games, sees the Blue Colts take a three point lead atop the League standings.

Sandesh Bhoite’s boys dominated proceedings from the get go, and the pressure paid off with an early lead when a corner in the 11th minute fell to an unmarked Jagdeep Singh. The right-back’s lob into the six-yard box was finished on the volley by skipper Robin Yadav to put the Blue Colts 1-0 up.

Bengaluru controlled play after taking the lead but couldn’t convert their chances. Bangalore Dream United, on the other hand, had their only shot on target in the closing stages of the first half, but Blue Colts’ custodian Sharon Sivan produced an outstanding one-handed save on the stretch to deny Avhishek Singh.

It took five minutes for the side to double their lead in the second half, as Shivasakthi, on as a half time substitute, cut inside in the box and used the outside of his right foot to curl the ball into the far corner with BDU ’keeper Anandu rooted to his spot.

The final ten minutes saw Bengaluru add two more to the scoreboard when, in the 82d minute, Anandu managed to save Shivasakthi’s effort from close range but Akashdeep Singh reacted to slot home the rebound. Four minutes later, Akashdeep turned provider when his low cross into the box was finished at the near post by Monirul Molla.

Bengaluru FC are back in action on February 15 when they take on Bangalore Eagles FC. 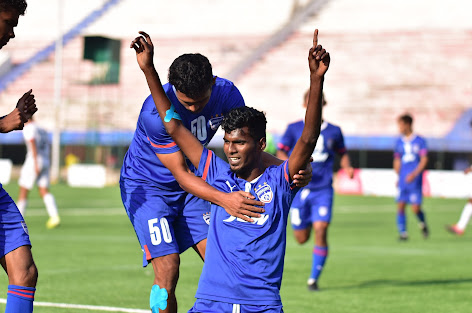 Posted by diegostrikes at 7:26 PM