After Mary Victoria, former Indian star from Karnataka and India’s first women’s coach inaugurated the 10-team women’s League along with former Indian international Mr. Aslam Khan, Dy. Gen. Secretary of KSFA, the much-anticipated opener got off to an exciting start.

Much was expected from IFF as they were the runners-up of the inaugural edition in 2019 but newcomers MPFC it was that went ahead midway through the first half.

Jyothi made the most of a confused defence and scored in the 24th minute. Five minutes before the break MPFC took a 2-0 lead when Alisha beat Kodi Alekhya under the IFF bar.

Jyothi doubled her tally 10 minutes into the second half before IFF pulled one back through an Aparna penalty.

Maatru, however, never allowed IFF into the game and late goals by Kaushalya (69th) and Soumya (87th) helped them sail through with a 5-1 verdict.

Sharda of Maatru Pratishtana FC was adjudged Player of the Match and was awarded an Intimacy Lingerie Gift Coupon by former Indian player Mary Victoria.

Winners of 2019 and runners-up last year BUFC open their campaign on Tuesday against newcomers Rebels while Slamzers from Belgaum, the only outstation club in the League clash in the second game. 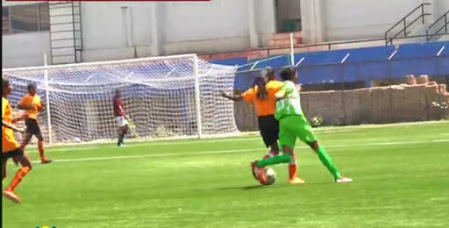 Posted by diegostrikes at 8:36 PM