E Ramakrishna, 91, popularly known as Rami expired today afternoon at his residence at Gavipuram, Guttahalli, Bangalore. He represented then Mysore state and Bangalore Blues before joining ITI and playing a major role in shaping the club’s future.
Ramakrishna ventured outside the state and plied trade at Calcutta (1953), Madras (1954), Ernakulam (1955-), Trivandrum (1956). Also, he represented the Indian national team against a Russian team played at Bangalore in 1956.
While with ITI, Rami won all the major trophies including the George Hoover Cup (BDFA League). He was one of the pillars behind ITI winning the first edition of Federation Cup in 1977. He coached ITI for more than a decade.
KSFA entrusted him with coaching assignment of the state youth teams. Also, he was instrumental in promoting women's football in the city. Later he joined Bangalore United Football Club, several footballers trained under him; he played an important role in shaping up their career. 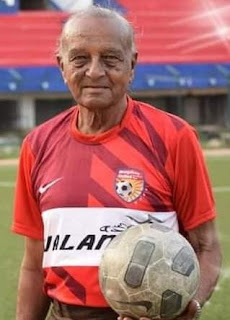 Posted by diegostrikes at 12:13 AM