Marco Pezzaiuoli’s Bengaluru FC side bowed out of the reckoning in the group stages of the 2021 AFC Cup, following a goalless draw against Bashundhara Kings, at the National Stadium in Male, on Saturday. The result meant the Blues stayed third in Group D with one point, while Bashundhara climbed to the top with four points, ahead of ATK Mohun Bagan’s late clash against Maziya S&RC.

Pezzaiuoli made three changes to the team that faced ATK Mohun Bagan, with Parag Shrivas, Danish Farooq and Bidyashagar Singh replacing Sarthak Golui, Ajay Chhetri and Udanta Singh. At the other end, Oscar Bruzon fielded an unchanged side from Bashundhara's 2-0 win over Maziya S&RC.

The Blues started the game on the front foot, and the first good chance came with just five minutes on the clock when Danish's lob picked out Bidyashagar's run, and the youngster's shot from the edge of the box was blocked by Bashundhara skipper Topu Barman. Jayesh Rane's effort from the rebound rolled wide.

Bashundhara won a free-kick on the edge of the box in the 15th minute after Danish tripped Barman, but Suresh intercepted Robinho's pass and made sure the set piece came to nothing. Naorem Roshan Singh’s long diagonal in the 21st minute found Cleiton Silva, but the Brazilian’s attempted give and go with Bidyashagar found the winger crowded out by the Bashundhara defence. From that move, the Bangladesh side went on a counter-attack that forced Musavu-King into a tackle that saw him pick up the game’s first yellow card.

Three minutes later, Cleiton’s ball into the box was met by a diving Yrondu Musavu-King, whose header was straight into Bashundhara ’keeper Anisur Rahman’s gloves. At the other end, Gurpreet Singh Sandhu did well to get his palms to Jonathan Reis’ effort from well outside the box, to push away Bashundhara’s hopes of a first half goal.

On the stroke of halftime, Pezzaiuoli made the first substitution of the game, bringing on Sarthak in place of Parag. The Blues then had the final chance before the break, when Tariq Raihan Kazi tugged Cleiton back to give away a freekick and pick up a yellow card. The Brazilian’s effort was blocked and Bidyashagar’s shot from the rebound sailed high and wide.

Bashundhara made a change of their own on the other side of the break as Mohammad Ibrahim replaced Mahbubur Rahman. The visitors came close to taking the lead in the 57th minute through Brazilian winger Robinho, whose effort deflected off Gurpreet’s foot and was sailing goalward until Roshan cleared with an acrobatic effort. The ball almost spun back in before Gurpreet pushed away with an outstretched arm.

Attacking with intent, the Blues came close on several occasions. Cleiton skipped past his marker in the 72nd minute and saw his low cross was blocked by Topu. Only minutes later, Alan Costa’s header from Cleiton’s corner deflected off the underside of the bar and bounced on the goal line, before ’keeper Anisur managed to collect.

The Blues had a flurry of late chances as they looked to break the deadlock, with Cleiton involved in the thick of things. The Brazilian’s deflected shot was pushed away by Anisur in the 82nd minute, and Chhetri was first to get the rebound. With the ’keeper off his line, Chhetri found Rane unmarked, but the midfielder’s effort was blocked by Topu. Minutes later, Leon tried to turn Kazi in the box but the defender stood his ground and did enough to block the winger’s attempted shot.

Pezzaiuoli’s final throw of the dice saw B-Team graduate Sivasakthi Narayanan make his debut, replacing Suresh, but it wasn’t enough as both sides took a point each in their penultimate group stage game.

The Blues will be back in action on August 24, at the same venue, when they take on Maziya S&RC in their final Group D game. 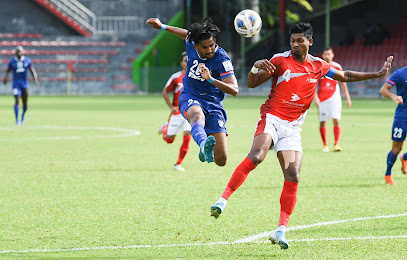 Posted by diegostrikes at 11:32 PM