Bengaluru FC Media
Bengaluru FC and Delhi FC played out a hard-fought 2-2 draw in their Durand Cup Group C clash, at the Mohun Bagan Ground, in Kolkata, on Saturday. Sivasakthi Narayanan (27’) put the Blues ahead before Willis Plaza (57’, 61’) turned it around for Delhi in the second half. Substitute Bidyashagar Singh (75’) brought Bengaluru back on level terms, helping Naushad Moosa's side take a point from the encounter.
Moosa made three changes to the team that defeated Kerala Blasters in the opening game, with Damaitphang Lyngdoh, Leon Augustine and Harmanpreet Singh replacing Akashdeep Singh, Namgyal Bhutia and Bidyashagar.
Ajith Kumar, who captained the side yet again, had to be alert in the fifth minute to intercept Plaza’s cross to Himanshu Jangra in the box. The Blues’ first chance of the game came when Sivasakthi was released down the right wing, and the striker’s cutback found Ajay Chhetri, whose shot was blocked by a sliding Suraj. At the other end, Lara Sharma had to be alert to deny Rinreithan Shaiza.
The Blues broke the deadlock in the 27th minute when Ajay's freekick bounced off the wall and Delhi goalkeeper Lovepreet Singh failed to collect. Sivasakthi, alert enough to poke home from close range, put BFC ahead.
The final effort of the half fell Delhi’s way when Shaiza got free down the left flank, but saw his shot well blocked at the near post by Lara.
Looking to get back into the game, Delhi brought on Victor Philip in place of Nikhil Mali as a halftime substitute. The Nigerian made an instant impact when his cross into the box was headed home by Plaza, past Lara. Minutes later, the Trinidad And Tobago striker got a second when his shot from a tight angle crept past Lara at the near post to put the Blues 2-1 down.
At the other end, substitute Bidyashagar, replacing Leon, also made an instant impact when he got to Harmanpreet’s cross and found the back of the net from an almost impossible angle, to bring Bengaluru back on level terms.
The Blues kept knocking at Delhi’s door in search of the winner, and had a few good chances to retake the lead. First, Bidyashagar saw his effort parried by Lovepreet and Harmanpreet was unable to get to the rebound. Later, Harmanpreet skipped free down the right and found Sivasakthi with a cross, but a combination of Loverpreet's hands and a defender's goal-line clearance denied the striker his second of the game. The final chance saw Akashdeep sent free down the middle by Sivasakthi, but the youngster’s shot sailed inches wide of the post, and the Blues had to settle for a draw.
BFC are back in action on Tuesday, at the Vivekananda Yuba Bharati Krirangan, when they take on Indian Navy. 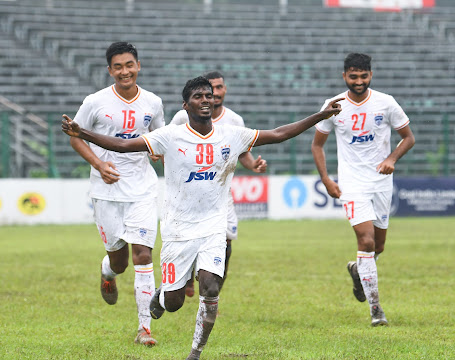 Posted by diegostrikes at 6:32 PM