Bengaluru FC began their Durand Cup campaign with a 2-0 defeat of Kerala Blasters FC in their Group C opener, at the Vivekananda Yuba Bharati Krirangan, on Wednesday. Namgyal Bhutia’s freekick (45’) put the Blues in front before the break, and Leon Augustine (70’) sealed the win in the second half.

The Blues started the game on the front foot and registered their first shot on target just five minutes in, when Akashdeep skipped past his marker and found Sivasakthi Narayanan, whose effort was straight into the hands of Kerala goalkeeper Albino Gomes.

Kerala’s first effort on target came in the closing minutes of the half when VS Sreekuttan broke free of the Blues defence, but saw his shot saved by Lara Sharma at the near post.

On the stroke of halftime, BFC broke the deadlock when Akashdeep was brought down outside the box, and Bhutia stepped up and curled the ball past ’keeper Albino’s reach to make it 1-0.

Both teams made half time changes, with Leon Augustine replacing Akashdeep for the Blues, while Rahul KP came off for Prasanth Karuthadathkuni for Kerala. Six minutes later, Harmanpreet Singh made his Blues debut, replacing Bidyashagar.

Kerala found themselves a man light just past the hour mark when RV Hormipam earned a second yellow card for bringing down Sivasakthi. Bengaluru doubled their lead in the 70th minute through Leon, who bundled home Harmanpreet’s cross from close range. The Blues continued to press forward, prompting the Blasters into reckless challenges to stop their advances. Persistent fouling saw them go down to eight men, when Sandeep Singh and Denechandra Meitei were given their marching orders in the space of two minutes. Bengaluru kept the ball, recycled possession and saw off the final minutes to seal the win.

BFC are back in action on Saturday, at the Mohun Bagan Ground, when they take on Delhi FC. 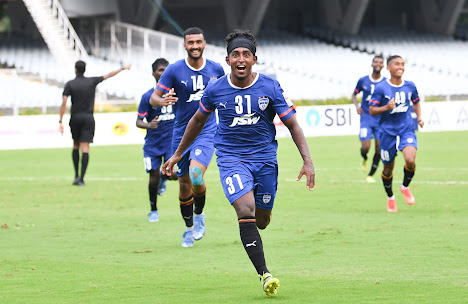