FC Bengaluru United (FCBU) got the better of torrid ground conditions and a marquee opposition as they pulled off a spectacular 2-0 win over Mohammedan Sporting in their final group game of the Durand Cup at the Kalyani Stadium in Kolkata. Both teams struggled with a sluggish outfield, but it was FCBU who remained dogged in attack and finally scored in the 64th minute through James Singh. The Bengaluru team were then awarded a penalty in the dying moments of the game that was smartly converted by Luka Majcen. With this win, FCBU enter the quarterfinals as group leaders.

The match got off to a sluggish start with both teams struggling to come to terms with the slushy conditions. Incessant morning rain resulted in huge puddles on the pitch and consequently, most of the action was confined to the wings. Crosses and long balls held sway with both teams struggling to string together a series of quick passes thanks to the outfield conditions.  FCBU seemed to have the better of the conditions early on; Yumnam Gopi Singh got a shot on goal that was saved by the goalkeeper in the 7th minute, a corner taken by Sanju Pradhan in the 27th minute was neatly deflected by the goalkeeper, Ronaldo Oliviera followed this up with another shot on goal in the next minute only to have the Sporting goalkeeper once again put in the save. Sporting slowly seemed to get into their groove with a series of corners and half chances, but it was a clear struggle for both the teams, with very little action in the middle and both unable to find men in the box to convert the half chances.

At half time the score was 0-0, with both teams having had some half chances, but failing to convert, thanks to the difficult ground conditions. The ball kept stopping in the puddles and both defensive lines were under pressure trying to deal with the long balls through the air before they skidded off the pitch.

Both teams began the second half cautiously, with Sporting getting a half chance soon in, their corner deflecting wide off the post.  FCBU kept chipping away at the Sporting defence and finally the deadlock was broken in the 64th minute. A corner taken by Ronaldo Oliveira was smartly headed in by James Singh to get FCBU on the scoreboard. Given the ground conditions, this was perhaps the only way a team could get onto the scoreboard and FCBU made the most of the opportunity presented.

Feeling the pressure, Sporting began to up the ante, but the FCBU defence held firm, Kunzang Bhutia pulling off a spectacular save in the 78th minute, coming off the line and pulling in a smart save to a short taken from close range. Sporting were awarded a free kick in the 86th minute, which was once again cleared by Bhutia. Five minutes extra time was awarded and with things getting tense, frustrations began to spill onto the pitch. Sporting appealed for a penalty in the 93rd minute, but it was FCBU who were awarded a penalty in the 94th minute after substitute Nihal Colaco was fouled inside the box. Luka Majcen held his nerve, stepped calmly up to the plate to seal the deal 2-0 in FCBU’s favour in the 95th minute.

With this win, FCBU end the group stage unbeaten with 9 points and go into the quarterfinals as Group A leaders. 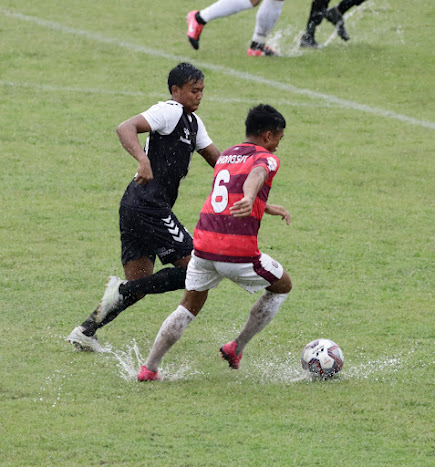 Posted by diegostrikes at 10:06 PM