Blues coach Naushad Moosa maintained that his young side will be out to impress when they take on Kerala Blasters FC in their opening fixture of the Durand Cup, at the Vivekananda Yuba Bharati Krirangan, in Kolkata, on Wednesday. Bengaluru, grouped alongside Kerala, Delhi FC and Indian Navy in Group C, will look to start strong, with the top two teams from each group set to qualify for the quarterfinals.

“We had a long pre-season for the AFC Cup, and our squad for this tournament has many youngsters who haven’t played too many competitive games over the last few months. We have a mixture of U18 graduates and reserve team players who Marco (Pezzaiuoli) believes have good potential. The Durand Cup is a prestigious tournament, and we’ll look at how these players can perform under pressure against big teams,” Moosa said, speaking at the pre-match press conference.

“Kerala have come here with a full strength squad, and have won their first game too. That said, it is important for any team playing in the competition to give their best, and that holds true for us as well. We are very serious about this tournament, and the players also know how important this is for them. They are raring to get onto the pitch and show everyone what they are capable of,” Moosa added.

While Kerala make their debut in the competition this year, the Blues have two previous appearances, having made it to the semifinals once, losing out to Salgaocar on penalties in their debut campaign in 2014. Moosa’s young side finished second in their group, in their most recent tournament appearance in 2019.

“As a coach, it isn’t easy for Marco to give chances to everyone, even though he wants to. That’s why we have brought a young team here, and everyone will get the chance to prove themselves. As a club, we are very invested in our youth development program and we want to reach a point where we have a senior squad that has a balance of experienced players and youngsters. It will take time, but we are on the right path. We have had encouraging signs over the last few years, in Suresh (Wangjam), Leon (Augustine) and Parag (Shrivas) to name a few. This year, Damaitphang (Lyngdoh) and Sivasakthi (Narayanan) made their first team debuts,” said Moosa, who lifted the Durand Cup as a player with Mahindra & Mahindra in 2002.

Kickoff between Bengaluru FC and Kerala Blasters is scheduled for 3 PM on Wednesday, and the match will be streamed live on the Addatimes website and app. 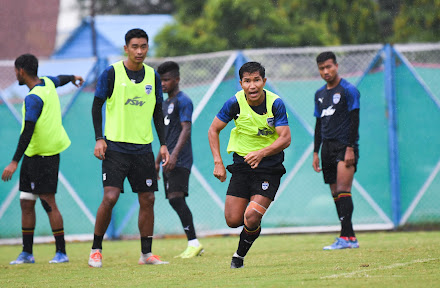 Posted by diegostrikes at 4:44 PM