FCBU start Durand Cup campaign in Kolkata with a win

FC Bengaluru United’s (FCBU) campaign in the Durand Cup began on a winning note against Central Reserve Police Force Football (CRPF) at the Kalyani Stadium in Kolkata. The teams had their chances through the game, but FCBU held their nerve in all the tight moments to emerge triumphant.

Both teams got off the blocks slowly, trying to hold onto possession. FCBU had a chance early on with new signee Pedro Manzi’s shot on goal sailing tantalizingly close over the post. In the 8th minute, a cross from the right in the box by Yumnam Gopi Singh set up a beautiful chance for Ronaldo Oliveira, who failed to convert. Manzi continued to pepper the goal with shots as FCBU gradually built up the intensity. CRPF FC too had their chances, including a dangerous corner in the 45th minute; goalkeeper Kunzang Bhutia’s timely save keeping the CRPF FC winger’s shot at bay. The FCBU backline too held firm right through the first half, neatly dealing with the long balls from CRPF FC.

Both teams upped the intensity in the second half, but it was FCBU who clearly held the upper hand with the number of close chances they continued to create. Close to three half chances in the first 4 minutes of the second half were created including a freekick taken by Manzi that hit the post and a header from Gopi that was saved by the CRPF FC keeper.

FCBU would feel hard done by when they were not awarded a penalty in the 60th minute when Manzi was pulled down in the box after a tackle from behind. But they refused to let that deter them and in the 63rd minute finally got on the scoreboard courtesy Manzi. A sumptuous cross from Asraf Mondal just beat the CRPF FC backline, superb control from Manzi as he evaded the keeper to net the ball in the bottom left corner of the goal.

Drama in the 71st minute as Manzi chipped the ball in for Luka Majcen, who tried to chip it past the CRPF FC keeper, who in turn, handled the ball outside the D and was handed a red card.

FCBU continued to apply the pressure with attacking substitutions and shots on goal. A freekick awarded to CRPF FC in the dying minutes was safely dealt with by Chelston Pinto, to seal the game in FC Bengaluru United’s favour. The Bengaluru team though would feel hard done by a couple of refereeing decisions, including the disallowing of a screamer of a goal from Sanju Pradhan towards the closing minutes of the game that would have pushed them to 2-0. 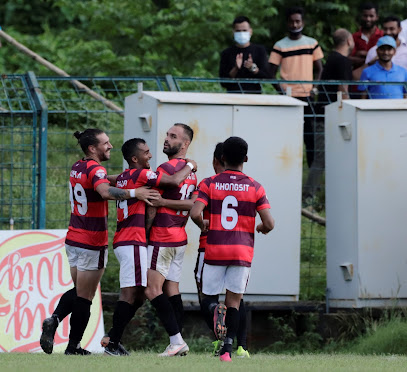 Posted by diegostrikes at 10:30 PM