Bengaluru FC’s Durand Cup campaign came to a heartbreaking end following their defeat to FC Goa in the semifinal, at the Vivekananda Yuba Bharati Krirangan, on Wednesday. Sivasakthi Narayanan (1’, 83’) scored at either end of regulation time, with Devendra Murgaokar (8’) and Redeem Tlang (72’) getting on the scoresheet for Goa. With both teams on level terms at the end of extra time, the game moved to a penalty shootout, where Damaitphang Lyngdoh saw his effort saved in sudden death, which meant curtains for the Blues in Kolkata.

Naushad Moosa made two changes to the team that beat Army Green in the quarterfinal, with Namgyal Bhutia and Akashdeep Singh replacing Biswa Darjee and Leon Augustine. On the other bench, Juan Ferrando made three changes; Naveen Kumar, Ivan Gonzalez, Alberto Noguera coming in place of Dheeraj Singh, Brandon Fernandes and Aibanbha Dohling.

Goa got the ball rolling and the Blues’ high press right from kickoff caught their goalkeeper Naveen Kumar off guard, whose attempt to clear was blocked by Sivasakthi, deflecting the ball into the goal to put Bengaluru 1-0 up. Goa made it 1-1 minutes later when Devendra headed in Muhammed Nemil’s corner from close range.

Despite the early equaliser, the Blues stuck to the game plan and made frequent inroads into the final third. First, Sivasakthi made space for himself and took a shot that curled away from the goal. Later, Bidyashagar Singh, on as an early replacement for the injured Harmanpreet Singh, cut inside from the left and saw his shot blocked for a corner. Minutes after, Sivasakthi found Bhutia’s run from inside the Blues’ half, but the 22-year-old’s first time effort sailed well over.

Just past the half hour mark, Sanson Pereira found his way into the Blues box and found Edu Bedia in the middle, but Wungngayam Muirang was alert to head the ball away with ’keeper Lara Sharma off his line.

On the other side of the break, Bengaluru took less than two minutes to carve open the Goan defence, when Sivasakthi played Bidyashagar through, but the forward saw his shot go high and wide. Two minutes later, skipper Ajith, pressing high up the pitch, stole possession outside the box, made his way in and found Akashdeep, whose shot was off target.

Goa’s first shot on target in the second half came from an Edu freekick, but Lara was alert to dive low and make the block. Looking to get a foothold in the game, Ferrando made a triple substitution in the 61st minute, bringing on Makan Chothe, Redeem and Aibanbha Dohling for Devendra, Nemil and Spaniard Ivan Gonzalez. The changes worked, as substitute Redeem put Goa 2-1 up with a left foot finish.

Sivasakthi, who gave the Blues the lead in the opening minute, brought them back into the game with a well taken header off Bhutia’s cross to make it 2-2, and take the game into extra time.

The thirty added minutes in humid conditions failed to separate the sides, as both teams, tired but resolute, stood firm to take the game into a penalty shootout. Muirang, Ajay Chhetri, Parag Shrivas, Bhutia, Ajith and Bekey Oram found the back of the net, while Akashdeep saw his effort saved, and Lara did well to block Reddem’s penalty. Damaitphang Lyngdoh saw his spot kick saved in sudden death, confirming an exit from the competition for the Blues with a 7-6 defeat in the shootout. 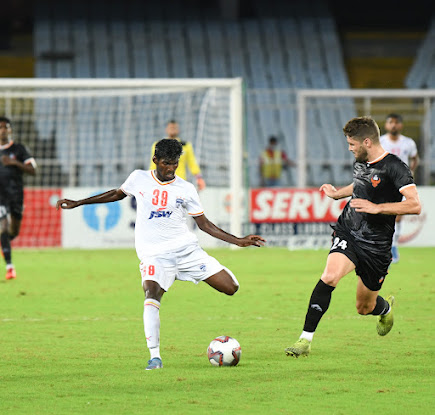 Posted by diegostrikes at 11:47 PM