Bengaluru FC Coach Naushad Moosa said his young side is confident of putting in a good performance when they take on FC Goa in the Durand Cup semifinal, at the Vivekananda Yuba Bharati Krirangan, in Kolkata, on Wednesday.

“The players do not have any pressure going into this game as they fully understand their roles and responsibilities now. FC Goa came here with a full squad, and it was the same with Kerala Blasters too. We know how good Goa is as a team. It won’t be an easy game, but we’ll step onto the pitch with the objective of making things difficult for them. The boys are really positive, and I just want them to play freely, express themselves and fight till the end,” said Moosa, speaking to the press ahead of the semifinal.

FC Goa come into the game winning all their group stage matches before defeating Delhi FC 5-1 in the quarterfinals. With 14 goals scored and just two conceded, Goa’s attacking and defensive prowess are a force to be reckoned with, and Moosa believes his side will have to be on top of their game if they are to come away with a positive result.

While the game is set for an evening kickoff, making it easier for the teams to play, Moosa believes that it serves as an even advantage. “In terms of humidity and heat, the 6 pm kickoff will really help the players. We played our games at 3 pm and then 2 pm so far, and it was difficult for the boys to adapt. You can see how the evening game allowed Mohammedan SC and FC Bengaluru United to play more freely in the other semifinal. While it will help us, I am sure it’s the same for Goa. The conditions are favourable for both teams to play with a good tempo, and it should be a good match,” said Moosa.

Kickoff between Bengaluru FC and FC Goa is at 6 pm on Wednesday, September 29th, and will be live on Ten Sports, and the AddaTimes website and app. The winner in this encounter will face Mohammedan in the final. 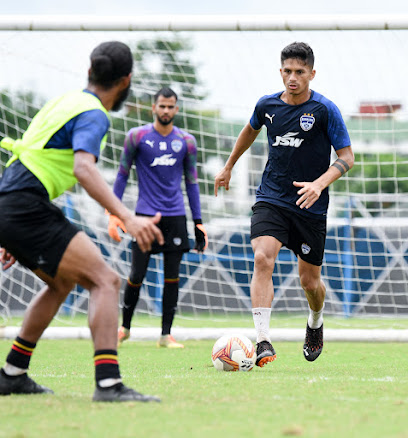 Posted by diegostrikes at 4:55 PM