AIFF Media
In an opening match that would do justice to the anticipation of any competition in world football, Rajasthan United FC defeated Ryntih SC 3-2 at the Bangalore Football Stadium on October 4, 2021. After finding themselves holding a sizeable 3-0 lead after 70 minutes into the game, Rajasthan United FC (RUFC) seemed on their way to a dominant victory before Ryntih SC came back with two goals to mount a tough fight towards the dying embers of the game. The team from Rajasthan saw out a tense final period to start their maiden Hero I-League Qualifiers campaign with a win.
The encounter began with a high tempo as both teams looked to carve out clear goal scoring chances in the opening ten minutes of the game. The first threat on goal came from Rajasthan United FC’s skilful and pacy winger Aman Thapa, whose mishit cross in the 3rdminute almost caught out Ryntih SC goalkeeper Padam Chettri and went on to hit the crossbar. RUFC winger Aman Thapa trying to isolate the opposition full back in a 1-on-1 situation was a regular feature of RUFC’s attack in the first half.
In the following minutes, the first golden chance of the game fell to Carlos Challam of Ryntih SC, who was played in behind the backline with a delightful ball over the top. Carlos tried to lob the onrushing goalkeeper Vishal Joon from the edge of the box, but put too much into his lob, sending the ball well over the goal.
As Ryntih SC dominated possession and created a few more half chances in the following minutes, the first breakthrough of the match came slightly against the run of play in the 11thminute for RUFC. After RUFC Captain Akeem Abioye’s shot from long range took a deflection, Dilli Ram Sanyasi was the quickest to latch onto the loose ball as he volleyed a low and hard first-time shot which Ryntih SC goalkeeper Padam Chhetri was unable to get behind.  The tenacious winger from Sikkim became the first goal scorer of the Hero I-League Qualifiers 2021.
Ryntih SC fashioned another golden opportunity to get on the score sheet and grab an equaliser in the 26thminute, as Carlos Challam crossed the ball for his teammate Robert Khongjoh, who would have had a glorious chance to head the ball into an unguarded net had the cross not been slightly too high for him to get on the end of.
As RUFC implemented a strategy of pressing the ball higher up the pitch and subsequently maintaining a high line in defence, Ryntih SC continuously tried to exploit the space behind the backline with well time through balls. Hardy Cliff had a similar chance in the 36thminute, but could not get on the end of the through pass as goalkeeper Vishal Joon rushed out to clear the danger. It could have been a sticky situation for the keeper, who had already received a yellow card previously in a similar exchange.
The action packed game showed no signs of slowing down, as Aman Thapa unleashed a thunderous strike from range which crashed against the frame of the Ryntih SC goal in the 42ndminute. RUFC continued to pile on the pressure as the game neared half time, and got their reward in the added time of the first half after a beautiful team move. After stringing quick and precise passes together that saw the team move into the opposition penalty box, Harpreet Singh squared the ball for teammate Sukhjit Singh to double RUFC’s lead on the stroke of half time.
The second half kicked off with Ryntih SC attempting to force the issue to find their way back into the game, but RUFC continued to manage the game efficiently and keep Ryntih SC at an arm’s length. The introduction of the experienced Chesterpaul Lyngdoh in the second half added a spark to the Meghalaya club’s attack, but it was their opponents who went on to further extend their advantage.
Aman Thapa, who had been threatening to score the entire afternoon, finally got his goal in the 68thminute. After RUFC progressed up the field in a quick counter attack, the ball came to Thapa on his favoured left flank. Thapa expertly cut back inside onto his right foot and produced a measured effort that curled back inside the goalpost to find the back of the net.
As the score line weighed heavily in favour of the team from Rajasthan, Ryntih SC began a spirited fight-back by netting the first of their goals in the 79thminute through Captain Banpynkhrawnam Nongkhlaw. After receiving the ball from a short corner, Sheen Stevenson crossed the ball into the box, which was headed goal wards towards goalkeeper Vishal Joon. Joon would have expected to do better with the initial effort as the ball slipped through his fingertips, and was bundled over the line by Nongkhlaw.
Ryntih SC now sensed a way back into the game and continued to attack the RUFC goal in numbers. In the 80thminute, Sheen Stevenson was fouled inside the box by Gurmukh Singh, earning his side a penalty and a further chance to claw their way back. Having earned the opportunity, Stevenson stepped up to take the spot-kick, which he converted by calmly slotting the ball into the goalkeeper’s right-hand side corner in the 82nd minute.
This set up the match for a tense final few minute in which Ryntih SC continued to pepper the RUFC goal with attempts from range, but could not find the all important goal to go level with the team from Rajasthan. 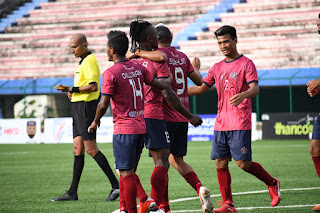