Defending champions FC Bengaluru United (FCBU) put in a dominating performance to seal an emphatic 8-0 victory over ASC in their second game of the ongoing BDFA Super Division Championship 2021-‘22 at the Bangalore Football Stadium. FCBU kept up the pressure and scored goals at will.

FCBU charged out of the blocks and looked on their game from the very first minute. ASC struggled to keep FCBU at bay in the first 10 minutes – Kinshuk Debnath’s header just went above the bar while Ronaldo’s freekick hit the crossbar. ASC managed just a solitary attempt on the goal, only to see it brilliantly deflected by Sreejith. It didn’t take long for ASC to buckle under the sustained pressure – Ronaldo was fouled inside the box in the 14th minute and Majcen neatly converted the penalty chance to get FCBU on the scoreboard. FCBU kept up the attack, with Kinshuk leading the way, controlling the game from the back including creating a chance for Ronaldo, through a long ball, which the striker failed to convert. After missing a couple of chances, Majcen notched up his second goal of the match, off the cross from Ronaldo. A minute later, in the 45th minute, it was Ronaldo who once again set up the goal, this time for Bedashwar to finish it off with a diving header.

The script rang true for pretty much the second half as well, with ASC unable to hold off the FCBU onslaught. Ronaldo scored soon after the second half began, and he was followed by Subash Singh – who came on as a substitute for Majcen in the 59th minute – who scored with his very first touch, adroitly going past the ASC defender, looping the ball past the keeper and closing it with a header. Aenem too joined the party, scoring his very first goal for FCBU in the 64th minute. Five minutes later, Subash scored his second, Ronaldo setting up an easy finish after a dominating run down the right flank. It was a hat trick of goals for Subash – a through ball from Ronaldo in the 81st minute was easily dealt with by Subash.

An emphatic 8-0 victory for FCBU, fittingly commemorating the day their home state Karnataka celebrates its statehood. 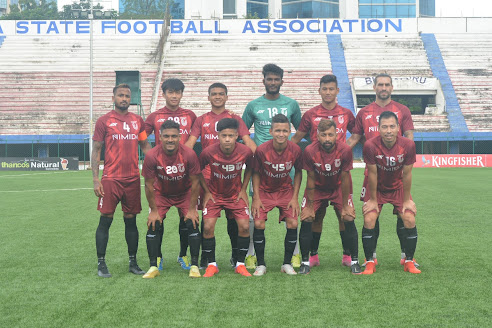 Posted by diegostrikes at 6:01 PM