Bengaluru FC were made to split the points once again as Students Union FC came from behind in a 1-1 draw in the BDFA Super Division League, at the Bangalore Football Stadium, on Tuesday. Macarton Louis Nickson (15’) gave the Blue Colts an early lead, before Student Union found the equalizer late in the game through Aaryan Amla (80’).

The Blue Colts made two changes from their 1-1 draw against Bangalore Dream United, bringing on Bekey Oram and Macarton in place of Omega Vanlalhruaitluanga and Rahul Raju. Eager to get their first win of the season, the team went on the attack from the get go and took the lead fifteen minutes into the game. Lalthangliana found Bekey free in the box, whose dummy saw the ball roll to an unmarked Macarton, and the forward placed his shot low into the far corner to make it 1-0.

Jagdeep Singh, who opened his account for the season against Dream United, almost doubled Bengaluru’s lead in the 41st minute when Lalthangliana found him in space inside the box. However, the defender’s shot was creeping into the top corner until Students Union goalkeeper Abhishek Ramesh’s outstretched arm pushed it over the bar.

Five minutes into the second period, Bekey stole possession high up the pitch and played Macarton through, but the forward’s lob into the box was cleared by Sujith Kumar. Immediately after, Union were down to 10 men following Shelton Nickson’s red card for a high boot that caught Edwin Rossario.

The Blue Colts, with the advantage of an extra man, created several chances to double their lead. First, Jagdeep cut into the box from the right and saw his effort saved at the near post. Later, Shighil NS, on as a substitute, found Lalthangliana’s run through the Students Union defence, but the forward shot well wide of the mark. In the 79th minute, Bekey won possession in the midfield and found Lalthangliana unmarked in the box, but his shot was saved by Abhishek.

Students Union were back on level terms only a minute later, when Amla managed to brush past Robin Yadav’s challenge and place the ball into the far corner. From the final action of the game, Biswa Darjee’s header off Omega’s cross beat the ’keeper but bounced off the crossbar and out of play.

The Blue Colts are back in action in the League on November 17, when they take on Kodagu United FC at the same venue. 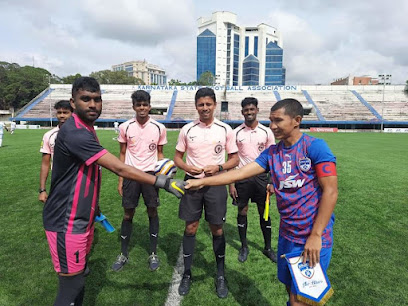 Posted by diegostrikes at 5:46 PM