The Blue Colts started the game on the front foot, and almost took the lead in the third minute when Lalthangliana lobbed the ball over the onrushing Dream United goalkeeper Nidhinlal Moolakaveedu, but couldn’t power his shot into an empty goal. Jagdeep made amends a minute later, latching onto a loose ball at the edge of the box and curling his shot in, to put his team 1-0 up.

In the 20th minute, Lalthangliana found space inside the box and cut back to skipper Biswa Darjee, whose looping shot sailed just over the crossbar. Despite being pegged back for most of the half, Dream United had two good chances in the space of as many minutes to get the equaliser. Abdulla SK wriggled free of two defenders in the box but saw his shot sail over the bar, before T Hariharan’s effort from close range in the 39th minute whizzed past the face of the goal.

Dream United got back on level terms just past the hour mark, when the referee pointed to the spot following Robin Yadav’s handball in the box. Nima managed to squeeze his penalty past Manik Baliyan’s outstretched hands to make it 1-1.

Down to 10 men in the final minutes after R Suhas picked up a second yellow card, Dream United ambled with possession and defended in numbers to hold on to a draw. The Blues Colts are back in action on October 30, at the same venue, when they take on ADE FC. 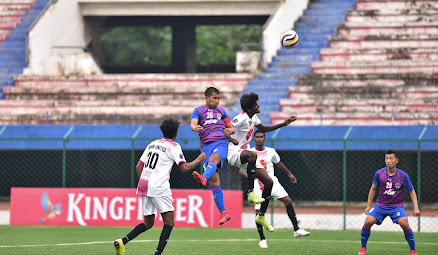 Posted by diegostrikes at 8:25 PM