Karnataka eke out a 1-0 win over Andhra Pradesh, move closer to qualifying

Hosts Karnataka were stretched to the limit before they eked out a 1-0 win over Andhra Pradesh in the Group A of Hero Santosh Trophy South Zone league. In another game Tamil Nadu came back from their 0-4 drubbing at the hands of the hosts to beat Telangana 1-0.

Karnataka who were rescued by an 90th minute strike by Kamalesh P kept an unbeaten record with six points from two games. Andhra adopted defensive tactics thus putting the brakes on the flow by the strong Karnataka side and almost pulled it off. However, with just a minute to go Kamalesh scored and ended the fight by the AP side, who now have lost both their matches and are out of contention.

In today’s second game, TN enjoyed the better of exchanges while Telangana were hardly the side that won their opener 4-0 against AP.

After two efforts came to grief on the post in the first half, TN skipper Vijay Nagappan finally broke the deadlock two minutes after restart. Vijay’s free kick sailed over the wall and went in off the near post beating Telangana custodian Hussain hands down.

With one team qualifying for the final round, Karnataka remain the only unbeaten side and a draw will see them through. Karnataka meet Telangana in the final game on Saturday afternoon and a win for the latter will bring them back into contention.

If TN win against AP in Saturday’s first game and Karnataka lose in the afternoon, then it will be a three-way tie and goal difference and head to head results come into play. 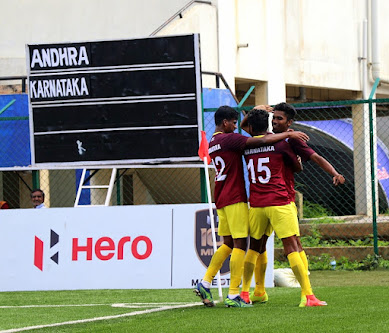 Posted by diegostrikes at 6:21 PM