Thursday will see two interesting encounters as Karnataka and Telangana will look to extend their winning run. Both scored identical 4-0 victories on Tuesday and on Thursday, Karnataka meet Andhra while Telangana take on Tamil Nadu.
Karnataka, who did impress in the opener still have to get their midfield players to string together an effective combination.
Andhra are a young squad while the hosts carry more experience and they meet in the first game at 11.30 am.
Telangana scored some late goals against Andhra and will take Tamil Nadu in the second game at 3.30 pm.
Tamil Nadu did pose a few problems to Karnataka and the 0-4 margin does not reflect their true strength.
Telangana have a task on hand but a win will set up a mouth-watering finale on Saturday against hosts Karnataka.
A win for TN against Telangana May make it easier for the hosts provided they make no mistake against Andhra. 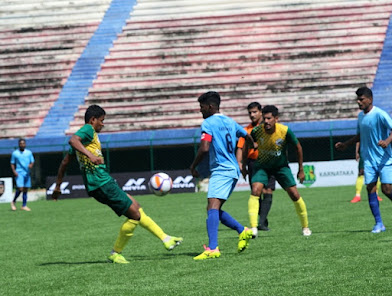 Posted by diegostrikes at 9:18 PM