Kickstart FC’s four first half goals were enough to see pick up all three points, in a BDFA Super Division encounter at the Bangalore Football Stadium, on Tuesday. Goals from Ankith P (12’), Solaimalai (33’, 45’) and Princewill Olariche (42’) saw Kickstart get off to a flying start. The Blue Colts managed to score twice in the second half but it would count for nothing. Macarton Nickson (47’) and Robin Yadav (89’) got on the scoresheet for Bengaluru FC.

It was Ankith’s in the 12th minute of the game who found himself in a great position during Kickstart FC’s first attack of the game, and managed to get a shot off his right foot to send the ball past Dipesh Chauhan in goal. Bengaluru FC kept pressing for the equaliser but their efforts were futile after Solaimalai’s initial shot was saved, but the rebound fell kindly to the same player only for him to curl it past Dipesh in goal to double the lead in the 33rd minute.

The Blue Colts struggled to find their rhythm which resulted in Kickstart FC capitalising and scoring two more in the last five minutes of the game. Princewill Olariche scored KFC’s third of the afternoon after putting his laces through the ball on the volley and burying into the bottom corner. It went from bad to worse for the Blues as Solaimalai scored his second goal of the game in the dying minutes of the first half after finding himself in the right place at the right time in the box and booting it into the roof of the net from close range.

The Blue Colts came out a different team in the second half and were on the attack from the get go. Bengaluru FC scored within the first two minutes of the second half after a beautifully threaded through ball from Thoi Singh found Macarton Nickson who made the perfect run to stay onside to find himself in a 1v1 position with the goalkeeper.

The forward kept his cool and slotted it past Jayanthkumar Krishnamurthy to make it 4-1. Macarton made all the right noise after coming on in the second half creating multiple chances for the Blue Colts. The BFC number ten found himself through on goal again in the 80th minute and was brought down by the goalkeeper, but the referee chose to wave on play. Bengaluru did get a penalty awarded to them a minute from time, that Robin Yadav converted to make it 4-2. 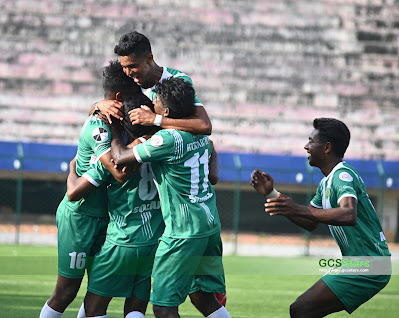 Posted by diegostrikes at 11:44 PM