Pink Panthers FC beat Bengaluru FC 2-0 in the KSFA Women’s A Division League at the Bangalore Football Stadium today. First half strikes from Aleena (21’,31’) were enough to see Pink Panthers claim three points, handing the Blues their second defeat of the campaign.

The game started with the Blues pushing for an early lead with the first shot of the game coming inside the first five minutes. Nandini carried the ball into the opponent's box and set up Sanjana Kashinath whose attempt on goal was just wide of the post. Goalkeeper Karnika Karthick was called into action for the first time in the 17th minute when a low drive from Aleena Tony required attention.

The first goal of the game came in the 21st minute after Aleena cut through the BFC backline with a burst of pace and slotted it past the reach of Karnika. The Panthers’ number 26 scored her second shortly after, picking the ball on the counter and charging her way into the Bengaluru box before a composed finish.

Bengaluru made changes ahead of the break as Ruthu and Shloka replaced Annika and Sila. Into the second period, Bengaluru pushed forward in a bid to reduce the deficit with long distance efforts from Tanvi Nair and Nandini blocked away. Minutes shy of the hour mark, Shloka had a chance to score but for stubborn defending from the Panthers’ backline.

Bengaluru made further changes as Bonifilia Shullai and Misha Agarwal were sent on to replace Chinmayi Tili and Shrujansri Saravanan, but couldn’t break the deadlock as the game ended 2-0 in favour of the Panthers.

The BFC Girls are back in action on Friday, when they take on PASS FC at the same venue. 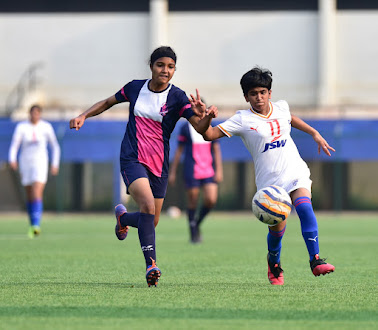 Posted by diegostrikes at 9:11 PM