Roots Football School 5 (Bhavya V Sanjana-2', 45', Sharavya Manoj-10', R Deviyani-48', Zayana-66') Vs Sai Sports Academy 1 (Shayana-31)
Roots Football School girls drubbed Sai Sports Academy 5-1 in their second game in KSFA Women’s A Division League. Coming from a draw in their first game, Roots took an early lead, they were 2-0 up within 10 minutes of the game but kept attacking opponent’s defence with no success.
Sai Sports Academy won their first match against GRK Girls FC. In today's game, their only goal arrived after the first-half water break against the run of play when Shayana zipped past Roots’ defence.
Roots Football School came back as a much-organized team in the later half. Sanjana scored her second goal, followed one each by Deviyani and Zayana.
Sharavya with her tireless effort grabbed the Player of the Match. 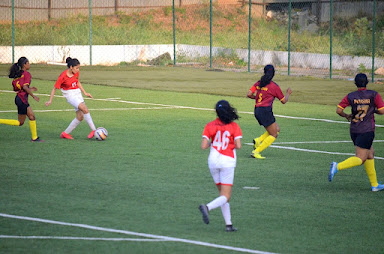 Posted by diegostrikes at 11:25 PM