Bengaluru FC’s U15 Girls side marked their first ever win in style with a 10-0 defeat of GRK Girls FC at the Bangalore Football Stadium, in Bengaluru, on Thursday. Striker Nandini, who also captained the side on the day, grabbed a hat-trick, as five other players found their name on the scoresheet.

The Blues controlled possession early on and almost found the opener when Nandini found herself in the 18-yard-box, but her effort rattled the crossbar and bounced back into play. Only moments later, Shloka Krishna found the opener for the Blues after a scramble in the box saw the ball fall perfectly for the forward who tapped home from close range.

Things went from bad to worse for the GRK Girls as Nandini doubled the lead two minutes after the opener. Gliding past the opponents and carrying the ball through on goal, Nandini drove a shot past Aishwarya Gowda in goal to make it 2-0.

The BFC Girls made it 3-0 shortly after when Tanvi Nair took advantage of an indirect free-kick in the box and smashed past the ‘keeper. The goals kept coming as Nandini picked up her second goal of the game right before the break, shooting from distance once again to make it 4-0.

Into the second half, the Blues refused to relent as Nandini squeezed a shot past the GRK goalkeeper to score her third of the evening. Bengaluru FC were sitting in a comfortable position before bringing on Hasvika Sridharan, Anwita Raghuraman, Saisha Chawla and Aabha Kudale with forty minutes on the clock.

Moments after coming on, Hasvika found herself in the right place at the right time after a shot from Aabha rebounded off the ‘keeper and fell kindly for the defender, who passed it into the back of the net to make it 6-0.

Hungry for more, the BFC girls kept the ball in the opponent's half and dominated possession. Rheanna Liz Jacob’s cross from the right flank fell kindly for Saisha, who took a touch and scored to make it 7-0.

Bengaluru would score three more times in the last ten minutes, as goals from Hasvika, Anvika and Saisha meant a 10-0 win for the girls, in what was their first ever win.

The BFC U15 Girls have four more games to play in the KSFA Women’s ‘A’ Division League. 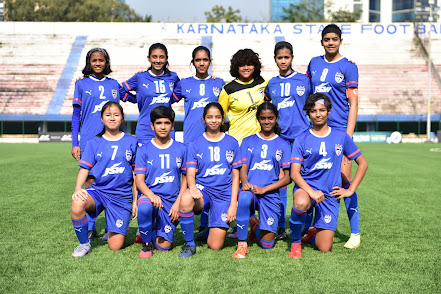 Posted by diegostrikes at 9:06 PM