Bengaluru FC went down 2-0 to Modern Girls FC in their first ever clash, in the KSFA Women’s ‘A’ Division League, at the Bangalore Football Stadium, on Tuesday. First-half goals from M Priyadarshini and Aishwarya Rathore settled the tie in favor of Modern Girls, who held fort at the back to thwart Bengaluru’s attempts to find a way back.

The Blues held possession for the first ten minutes and even found themselves through on goal when Annika Srivastava had only the goalkeeper to beat but chose to make a pass which was too short for Shloka Krishna. Modern Girls turned it up a notch and punished the BFC backline after Priyadarshini found herself through on goal and slotted past Karnika Karthick to take the lead in the 11th minute.

Bengaluru FC conceded a corner only moments later and found themselves two goals down when Simran Bhargava converted past Karnika from close range to make it 2-0 with twenty minutes left to play in the first period.

BFC U15 Girls Head Coach Levanah Samuel made changes at the break as Nandini and Ruthu Sreenandhan came off the bench. Nandini added impetus to the Blues' attack, carrying the ball down the wing. Ten minutes into the second half, her effort from distance tested Modern 'keeper Aruni Singh, but wasn't enough to reduce the deficit.

The chances started coming for the Blues as Nandini found herself in the thick of things again and attempted a shot from distance on the hour mark, but her effort was just wide. The Blues pushed forward in search of a goal but fell short in the attacking third as the referee blew his whistle to bring an end to proceedings.

The BFC U15 Girls are next in action when they take on G.R.K Girls FC at the same venue, on Thursday. 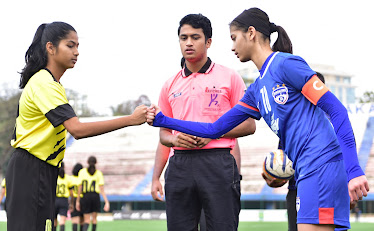