AIFF Media
Kickstart FC started their campaign in the Hero Indian Women’s League (HIWL) with a dominant display, registering a 3-1 victory against debutant PIFA SC.
PIFA SC started the game deep down the defence keeping Kickstart at bay. The Karnataka-based side created a lot of chances as they kept Anjali busy under the PIFA post. It was finally at the 23’ minute that the deadlock was broken when defender Nirmal Devi scored a screamer from around 40 yards or more – already a contender for the goal of the tournament.
Forward Parameswari Irom doubled the lead for Kickstart in the 33rd minute. But the joy lasted seconds as PIFA pulled back one in the next move the same minute itself -- PIFA forward Nissilia sent it at the back of the net after she received an inch-perfect cross from the right-wing.
Thereafter the game opened as both sides continued to create plenty of chances. Kickstart utilized their wings well but lacked in their finishing while PIFA continued to build from their back.
Getting back from the halftime break, Kickstart seemed sharper as they kept on pressing looking for the insurance goal. PIFA SC lost too many balls in their midfield making it easier for their rivals.
Zairem of PIFA got the first booking of the evening for bringing down Kaviya illegally near the hour mark. It was seconds later that Kaviya sealed the fate of the match in the 58th minute. Nirmala lobbed the ball inside the box and with PIFA keeper Anjali fumbling, Kavya was quick to capitalise. 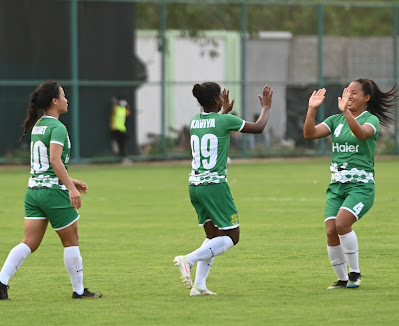 Posted by diegostrikes at 12:39 PM